One of the reasons I hadn't really blogged all that much this week was because I really just felt over-saturated with political buzz-tasticness from following the preparations and execution of the 2012 Republican National Convention. I know some people find these conventions tedious and out-dated, since there's never a floor fight and the tickets are basically a fait accompli before they even get underway, but I'm kind of old-fashioned--I like the theater and pomp and majesty and bunches of balloons falling on folks and whatnot. This is my kind of reality tv. So to get back into the regular blogging swing, I'm just going to throw up some pictures and my impressions of the week that was.

One of the themes of the convention was definitely the idea that "We Can Do Better". It really has, in some ways been the defining message of the GOP since way back in the early days of the primary contests. The Republican sense that "We Can Do Better", however, did not prevent former MA Governor Mitt Romney from becoming the GOP presidential candidate. As many of the endorsements from his fellow Republicans (especially his primary opponents) went: "Feh, he can't do worse than the Democrat we've got in office now."

Another, more prevalent theme was the "We Built It" theme, which was in response to something that President Obama didn't exactly say, but all the Republicans think he certainly meant, so they're going with it. My overall opinion of this tactic is that it is stirringly dishonest, (as was so, so much of the convention in general), but as the above picture shows, some unintentional honesty trickled through. 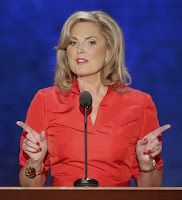 One of the speeches the Romney campaign was especially keen on people paying attention to was delivered by Ann Romney, whom they credit with making Mitt seem more human and warm. She and the five strapping chips off the old Romney do at least make him seem like a person with a wife and family, although I don't think it's fair for her to have to be the liaison between Mitt and regular folks, because having a liaison between oneself and regular folks is not a regular folks kind of thing.  Also, as with Paul Ryan's mother, what is she supposed to say?

Another well-awaited speech came from NJ Governor Chris Christie, who many people thought might consider a run for the Oval Office himself this year until he went ahead and endorsed Romney for the candidacy.  No, he really meant it. Of course. Not this year. In his speech, however, he did seem mighty chuffed to accept the nomination for 2016.  Wait, that didn't happen yet?  My bad. 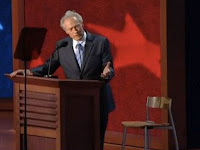 Anyhow, we all know that a convention isn't really over until you hear from the most important person there, by which, or course, I mean the candidate himself....the running mate who is being introduced to a wider political audience....celebrity guest speaker who decides to derail the evening's festivities by muttering at a piece of furniture. Since I already blogged about this at Rumproast, I'm going to take the liberty of imagining I'm talking to Clint Eastwood on the night he gave his speech, just a few minutes before he went on:

"Hey, where you going with those waterskis, I mean, that chair, Clint? You're right, I shouldn't be that casual, I mean, Mr. Eastwood? "

"Oh, going to see a man about a shark, sounds interesting. Say, do you have any remarks prepared? I don't see any notes in your hand."

"Oh, sure. I bet you are going to give someone an earful. Oh, Mr. Eastwood, do you think you'll be seeing Mr. Romney after the speech--of course you will! So just give him two thumbs up from me and say 'Aaayyyyy'. Yeah, he won't know what that means either, but it'll be funny.  Thanks for making my day."

"What's that? You don't say that anymore. Eh. You will, though. Yeppers. You sure will."