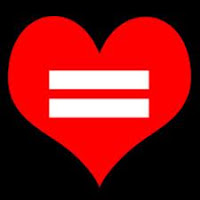 Freedom to Marry. We support the right of all families to have equal respect, responsibilities, and protections under the law. We support marriage equality and support the movement to secure equal treatment under law for same-sex couples. We also support the freedom of churches and religious entities to decide how to administer marriage as a religious sacrament without government interference.

We oppose discriminatory federal and state constitutional amendments and other attempts to deny equal protection of the laws to committed same-sex couples who seek the same respect and responsibilities as other married couples. We support the full repeal of the so-called Defense of Marriage Act and the passage of the Respect for Marriage Act.


I really think the end of DOMA has to happen in Obama's 2nd term, and I really think we need an Obama 2nd term to get there (not that it wouldn't happen eventually--but I think sooner is better). Because as I've posted before, Romney will not do one thing for LGBT* rights.

What I am happy about is that the party spelled it out. The position overall has gone from "evolving" to "decided". And it's about time. Who needs the NOM-skulls and the AFA-holes and all them? I stand with equality, individual freedom of choice, and love.
Posted by Vixen Strangely at 12:08 AM