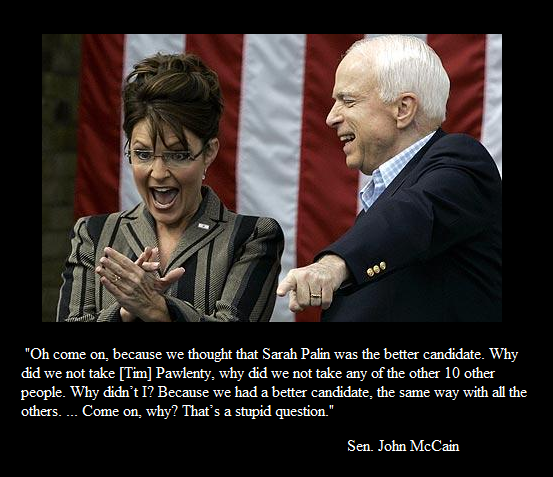 The above was Senator McCain's slightly awkward defense of Romney amidst the claim that it was something in Romney's tax returns that caused McCain to reject him as a running mate. I don't think it's untrue. Gov. Palin had some positives in terms of the McCampaign's needs that Gov. Romney would not have been able to satisfy: She came off as a regular person who could impress the base, her conservative bona fides were unassailable, and she offset the claims that wealthy Sen. McCain was out-of-touch.  In comparison, Romney would be just another wealthy, out-of-touch, occasional flip-flopper who could do pretty much nothing to balance the ticket.

I understand what McCain was saying.  But don't think for a minute I don't really appreciate the way he put it.  Sarah Palin was the better candidate. Better than Romney, anyway.  And better than the guy he's likely to pick as his running mate, too.

While we ponder how awesome comparing Mitt Romney to Sarah Palin really is; I might as well link to the other stuff the McCampaign was looking at regarding the life-size Ken Doll that John McCain didn't want to share a stage with.

One is tickled, truly.

Edit: And one would be remiss in not suggesting that the comparison may very well be why Palin seems to not have gotten a GOP Convention invite.
Posted by Vixen Strangely at 11:50 PM

The "Conservatives 4 Palin" are simultaneously tickled pink and butthurt by McCain's comment.