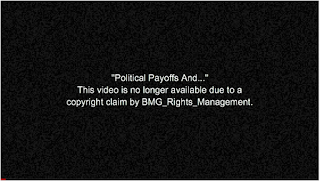 I never got to see the ad before it was taken down (copyrights, how do they f-ing work, amirite?), actually, but part of the basis of the ad was President Obama's brief singing of Al Green's "Let's Stay Together".

Think about this. The Romney campaign dropped an "attack ad" that reminds people that Obama is cool, charming, and can sing.

Note--he was on-tune, and the singing was brief.  People applauded, and wanted a little more. The video went viral, and people bought the ringtone. So when Romney tunelessly belted out "America, the Beautiful" on the campaign trail shortly afterwards, some people kind of assumed he was saying "Hey, look at me, I'll be a singing fool, too."  You know, like people do.

The contrast is what makes the "Firms" ad work in the way the awkwardly-titled "Political Payoffs and Middle Class Layoffs" couldn't possible. Romney's choice of a patriotic song isn't being derided, so much as the juxtaposition of his adoption of patriotism being hollow when played against business practices that haven't built up this country so much as--undermined the middle class via....layoffs.

Yeah. Romney might want to stay away from talking about layoffs--he's pretty well identified with them.

But also--"I am so in love with you..." as a torch song to Obama's donors? Hmm. Romney doesn't want us to know about his big-dollar bundlers: while Obama was pretty successful with small-dollar donors--and even people whose investment was no more than their vote benefited from Obama's policies.

It seems like the Romney campaign inadvertently made an ad that might encourage people that the USA and the Obama Administration should "stay together" another four years.  So maybe the take-down was actually not a bad thing for the Romney campaign so much as a warning not to respond in haste.

(Although with all the money being thrown at his campaign by fellow $illionaires, maybe his campaign can afford to make crappy ads in job-lots and just throw them out there. In which case, they needn't mind me--at least it's one thing he can do to stimulate the economy.)
Posted by Vixen Strangely at 11:53 PM