That's how dad got the other kids to play with him. 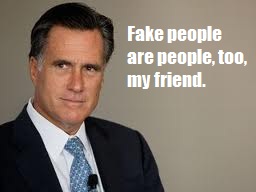 Well, here's an interesting thing.  We knew the Romney campaign was fond of making up fake parody Twitter accounts, like @Bill_Clinton12  and @JoeBiden2008, but apparently, his group of Twitter followers have been greatly enlarged by fakes.

Now, I'll give the Romney campaign a brief benefit of the doubt.  Maybe a friendly spammer thought s/he was doing the campaign a solid. On the other hand, a superficial tweak like trying win the "war" on social media by follower count is just the kind of useless thing the campaign that believes in a place called Amercia might do.

Oh--I retroactively didn't use the above blog-title. That's just mean.
Posted by Vixen Strangely at 5:06 PM

The commentariat at reddit is on fire, "Mitt is more comfortable hanging out with people more like him, robots."

Check this interesting piece of evidence out, also this. Thanks for bringing this up, Vixen S.

Interesting--per the state counter, the new followers has definitely leveled off. In the interest of fairness, it appears the campaign is denying that they buy followers

and at 140 Elect, the idea was floated that this could be a dirty trick--

Or if you're sinister, cynical and absurd, it's the old self double-cross: Troll themselves, so they can cry "Foul!" later.