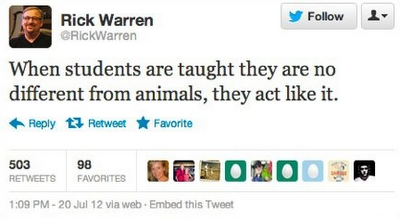 This Tweet blames acts of mass murder on evolution. Because.... Because he can? This isn't a critique of evolution, so much as a demonizing of it.  He's saying: Students learn this witchcraft science of evolution and proceed to do horrible things (so avoid it). It seems very likely that James Holmes was mentally ill and didn't become so because of his acquaintance with the theory of natural selection.  It seems Warren is taking an opportunistic stab at evolution because Holmes was studying science (Warren finds a witch!)

For what it's worth, evolutionary biologists aren't regularly shooting up schools and malls and movie theaters.

Animals also didn't invent guns and don't commit acts of mass murder against their own kind. Only human beings do that, and they have been doing it for a long time. You can find acts of mass violence of man against man, such as war, throughout history.  You can even read about it in the Bible.

I'm putting this under the label of "disasters" because it's the same kind of religious doomsaying where the horrible example of the moment is said to have occurred as a result of disobedience to God--it's nice to know we'll still have this tradition around when the old ghouls like Pat Robertson shuffle off their mortal coil (not).
Posted by Vixen Strangely at 9:15 PM

Do any of them have even the slightest grasp of what evolutionary theory involves?

Simple answers to simple questions: No, they do not. They're pretty sure it means somebody's grandparents were monkeys, and when God wrote the Bible he did not allow for the possibility.