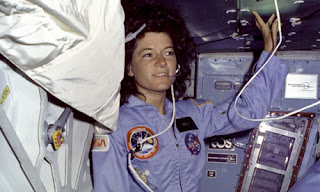 I remember when Sally Ride was in the news for being the first US woman in space--I was happy for her, but thought it weird that NASA wasn't already sending women up into space all the time. All things considered, given her commitment to science education, especially for women, I suspect she felt the same way. She was a pioneer and an inspiration.

I've read a bit about her kind of "obituary outing".  In that she was a pioneer in science, in the courage to be a part of the NASA space program, in being a fine educator, I don't know that it was necessary to be an activist--she wasn't "not-out" but it wasn't a public issue for her.  But I think it does bear noting that despite being an American hero, her relationship with her partner, despite 27 years of devotion, isn't considered the equal of any similar, sanctioned, straight marriage.  This strikes me as a singular travesty of our still-bigoted system under DOMA. In what way is her partner not widowed by her passing? How is the loss not the same?

That certainly isn't right. Her example still has something to teach us--as it once did about gender equality, about marriage equality, now.
Posted by Vixen Strangely at 12:57 AM