I Got Your Contempt Right Here 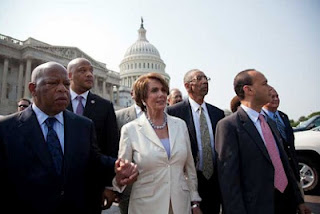 So, in a story of lesser importance, the Boehner Congress voted 255-67 to cite Attorney General Eric Holder for contempt of Congress.  That would have been 255-something a bit more substantial, but over a House Democrats walked out rather than participate in a farce.

As has already been covered here and even more revealingly here,  this Fast and Furious business is much to-do about the Republicans wanting scalps, generating heat and light, and generally persecuting the Obama Administration instead of doing what they could be doing, like passing some job-creating legislation regarding  building roads and bridges and  fighting wildfires and keeping teachers on the job and the like.

Now, I'm not terribly in favor of executive privilege as a general thing--a very good case is made right here regarding how it could be overused, but still--

Could there possibly be a cover-up of something we all have so much information about, now?   I mean, what exactly do they want to know? And what do they think is the importance of knowing it?

After reading everything I could about this issue, I don't think this at all looks good for most Republican policy on guns. It especially doesn't look good for NRA-backed lax gun-sale laws. My read on it is that guns actually walk their way to drug-dealers because they can, and because bad people will seek out guns to do bad things like shoot border agents with them. And that this probably means that we should make some legislation regarding gun sale restrictions with some teeth in them so bad people can get prosecuted before they, you know, kill Federal agents or the like.

I admire the Democrats who walked out for making a small, grumpy gesture about how absolutely full of non-nutritive lipids the GOP case is--especially if they want to make oleaginous Darrell Issa eat his self-importance.

But I want them to actively question what this is really about. Whenever possible, they might just want to raise the issue of what exactly illegal thing the GOP congresscritters think took place--by the agents involved. Instead of trying to pin this on Holder's Justice Dept, I think attention should be shifted to the very gun worship that obviously persists to this day.

What I'm saying is,  I suspect Boehner probably wanted the contempt vote to come today, so it nestled under the armpit of the bigger news about the ACA decision. After failing to even have an opportunity to spike the ball, the GOP-dominated Congress went about the business of punishing an Obama-Administration official for being liberal.   And the very best revenge is working to further discredit the GOP congress in hopes of getting something better.

I see your contempt vote, GOP, and my own contempt is raised.

Ya know, if Holder had gone after members of the Bush administration for the grossest of malfeasance, the GOP probably wouldn't have swept the 2010 elections. The best defense is a good offense, but the whole "let bygones be bygones" schtick seems to only be played by Democrats. The GOP will go after Dems for nothingm while the Dems won't go after the GOP for actual crimes.

I wish the Democrats could learn how to play the game.

The problem seems to be discipline. GOP gets everyone on message as soon as shouting "Hey everybody, let's put on a show (trial)!" Just this week, it's been astonishing to hear cons rant about all the guns out there, and support a health care view that is objectively pro-mooch. Whereas our lot had 17 post-op spine donors who voted to cite Holder for contempt, including one primary-loser who isn't even facing an election in Nov. who said "he didn't have a choice." Seriously? Pro-tip, I think the other choices were "nay" and abstain.