ACA Upheld by SCOTUS--Which is Quite Something. 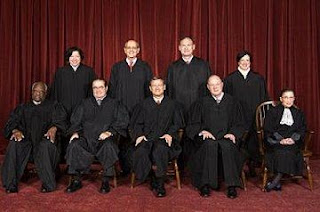 I think the announcement this morning that the ACA was substantially upheld by SCOTUS wasn't the surprising part to me so much as the composition of the decision.  I had it figured as 6-3 to uphold the mandate, with Kennedy on the majority and Roberts switching to prevent one of those troublesome 5-4 decisions that make the court look all partisan and divided. Finding out that Kennedy was on the side of the dissent and Roberts seems to have been the decider is kind of fascinating to me.

I'm not the only one fascinated, because yeah, it is kind of interesting.  I think what this reveals about Justice Roberts is that he's what I think of as a "conservative-flavored" conservative; remember that the mandate was originally born out of the right when for whatever reason (but I'll assume it had something to do with generally thinking that people having access to affordable health care was a positive, and most voters being in favor of same) conservatives seemed interested in pursuing the issue of universal health care. This notion only became anathema to many on the right when Obama adopted it--

But the basic idea of a mandate as an incentive to people to get coverage being about individual responsibility to take care of one own health care--whilst contributing via one's responsible behavior to lowered cost for all as a civic matter, isn't tyranny in the least. Are tax returns tyranny? Is jury duty tyranny? Demands are made of citizens on occasion because that is what builds a society worth living in. The maggot-gagging outrage-gargling on the further right of "Tyranny!' and "Death of Liberty!" are just hollow.  To think that anyone would be overcome with pee-in-the-pants glee:

at the idea of the striking down of a law that helps up to 50 million uninsured Americans get coverage (that's Rep. Jean Schmidt of OH, R.-obvs.) is gross. This shouldn't be such a partisan issue. It isn't about scoring points--it's about our fellows citizens' life-and-death issues. It's about coverage for our old and young. It's about women getting pre-natal care and hospital coverage for their pregnancies. It's about kids getting check-ups. It's about people getting that ulcer, that shortness-of-breath, that wound on the foot seen to, that they were putting off because they couldn't afford to be sick, let alone afford to get well.

As for the one part that had been struck down, with respect to Medicaid expansion, I tend to think a federal solution could be constructed along the same taxation grounds, just as the Earned Income Credit or other credits can be used to benefit people within certain means tests. I mean, I think it could get passed if there was a significant Democratic majority in Congress. So, like, I think we should try and make that happen....
Posted by Vixen Strangely at 11:55 PM