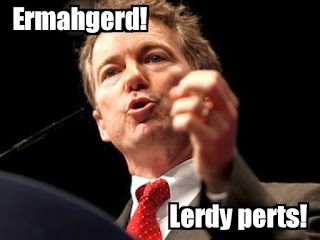 I would say I didn't know why freshman Senator from KY Rand Paul tried to insert an amendment asserting that human life begins at conception into a flood insurance bill, but I think I do: he's signifying. If there was a move that said "Boy, look at me, I am certainly pro-lifing it up in a pro-lifity life life way over here!" well, that would be Rand, son of Ron, right there.

It certainly does take me back to early in the political career of Rand, son of Ron, which would be last year, when he inserted his pro-life cred into a discussion of one of his favorite subjects, light bulbs--and toilets.  He said at the time:


“Actually, that’s the point,” Paul said, during an appliance efficiency hearing at the Senate Energy and Natural Resources Committee.

“The point is that most members of your administration probably would be frank and characterize themselves — and upfront — as being pro-choice for abortion,” he said, “but you’re really anti-choice on every other consumer item.”

Paul continued on a string of attacks against federal regulations and labeled the lighting efficiency standards set by a 2007 energy law as just another government overreach.


See, I think in Rand Paul-world, flood insurance and abortions are totally the same thing because they are things on the market that people could buy--so why not regulate light bulbs, I mean, toilets, I mean--oh wait--the actual personal bodies that live human beings inhabit and will live with until they die?  Hmm? And since people are insured against fire and stuff, I can't wait to see how he tries to append an anti gay-marriage amendment to emergency wildfire relief--because that's apparently how he rolls. It's as if nothing intersects with human experience except in terms of somebody paying for things--people paying for toilets that will accommodate the exceptionally prolific bowel movement, or light bulbs that are inefficient but do not remind one of soft-serve ice cream--and yet, if women mean to pay for certain health care services or let's say gays mean to pay for marriage licenses--


Oh--suddenly there's libertarian-lite-as-in-not Rand Paul, either sucking up to the Christian Right or genuinely believing that the government will let a fool part with his money any way he wants, but fuck him or especially her if s/he thinks the government doesn't own her/his pee-pee parts. Especially where the wee fetuses are concerned.


Basically, Rand Paul is not only claiming government dominion over your, my, our pee-pee parts, but saying the government has a right to parent our children, too, since he's claiming loco parentis over the fetus-folks by the government, and basically threatening to eminent domain ladies' bodies on the wee person's behalf.


That, my friends, sounds like a real government takeover. Maybe he could get some more support for that if he got fetuses the right to vote, but good luck getting them out to the polls, huh?  They don't speak English and they don't get out much, you know?


I think what I'm saying is, Rand Paul is quickly proving himself to be a shining example of the future of the Republican party, and stuff. 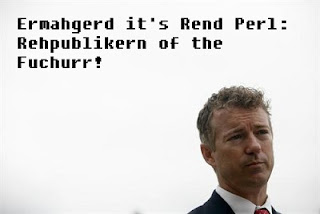 I'm not saying the future is looking great for them.

X-Posted at Rumproast.
Posted by Vixen Strangely at 11:27 PM

Libertarians have a funny definition of "liberty".