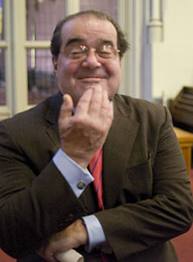 So, here's just some observations based on this piece from TPM.

First--state sovereignty just isn't what it used to be for about 150 years, give or take two or three, but that Justice Scalia mentioned it in his 22-page dissent is interesting.  I think he's throwing the kitchen sink, the detergent and the dishrag at the Obama Administration, actually.

Now, I'm no constitutional scholar, nor even a lawyer--I'm just a blogger with what I hope is a reasonable grasp of history. I get antsy when someone makes a statement like:

“We are talking about a federal law going to the core of state sovereignty: the power to exclude.”


Maybe this has a different meaning for him than the meaning that comes to my mind when one refers to the history of exclusion in this country which included state laws directing the removal of freed slaves , for example.  My worry is that the interpretation of the Tenth Amendment that usually gets used in these arguments weakens the protections of the Fourteenth. I dunno. I just think that if individual states get to make their own laws regarding immigration, they muddy the issue of jurisdiction in providing due process. Say that a given state does “identify a removable alien and hold him for federal determination” .  And the federal government says "To do what, now?"


I get why Scalia brings up the recent change in enforcement--Arizona's scheme doesn't work unless the federal government is happy to play along.  ("Why yes, we'll be quite happy to round up and deport your deportables--thank you for the collection thereof.")  This case even being brought plus the Homeland Security change indicate it is not--and so then what? Would Arizona maintain the authority to detain indefinitely or deport people on its own?


(Talk about allocation of resources--if allocated to the states, let's just have a nation of Sheriff Arpaios using state tax money to enforce increasingly "exclusionary" ideas about who is desirable as an inhabitant of any given state. And naturally a supporting state apparatus for oversight--due process!)


But regarding the "dangers" of non-enforcement (of young people who basically are here in American through no fault of their own, are not criminals, etc?) and, what I think is my favorite line, the determination of Justice Scalia that the Obama administration: “desperately wants to avoid upsetting foreign powers.”  Really? The perceived dangers (as politically determined by a given state) of people determined not to be dangerous by the federal government (thus the non-enforcement of deportation, unless he thinks the federal government has gone dangerously cuckoo--which he's hinting at--don't be shy, Tony!) and the possibility that immigration decisions might be made in the national interest?


If I were an Originalist Gangster, I might assume these were indications of why so much immigration authority was entrusted to the feds in the first place.


Eh. It's late. I could be over-thinking it. I just can't wait to see what comes out about Thurday's announcement of the ACA decision.
Posted by Vixen Strangely at 12:46 AM