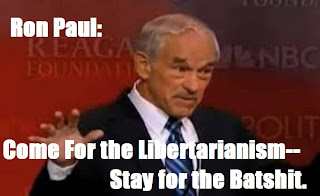 I feel like I should say something to mark the sorta-suspension of the Ron Paul campaign, just as I marked the end of the Cain, Bachmann, Perry, Santorum, and Gingrich campaigns. Somehow, my heart just isn't in it. For one thing, even if Ron Paul isn't actively campaigning, you know, deep down, some of his supporters will never say die. And also, Rand Paul. And also, delegate finagling.  (Would Ron Paul get a prominent berth at the Convention to give one of his speeches? Let me reiterate: one of his speeches?)

In other words, to the extent that he was a fixture of this campaign year, his version of not campaigning would still feel to me like he never left, if that makes sense. And if it doesn't, that's probably fitting.
Posted by Vixen Strangely at 11:50 PM

Email ThisBlogThis!Share to TwitterShare to FacebookShare to Pinterest
Labels: best of the worst 2012, GOP, ron paul