So long and Thanks for all the ....Santorum, 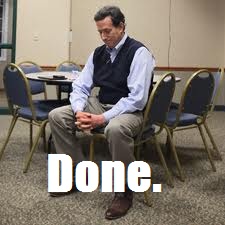 I guess it should be noted for posterity that theocratic homophobe Rick Santorum has bowed out of the 2012 GOP Best of the Worst competition after a morning of speculation turned out to be dead-on.  From a purely blogular standpoint, I’m going to miss him, a little, but he’ll never really be gone. Whenever awkward tone-deaf metaphors for gay marriage are spoken, he’ll be there. Wherever “Did he or didn’t he?” vague racial comments are made, he’ll be there.  Whenever Fox News decides they can afford to cut him a paycheck for doing his thing, he’ll be there. Whenever the earliest availability for scrounging up 2016 presidential interest appears—he will totally be there. Or, to employ a different cultural meme no less sacrilegious, where job creators defend their privilege, it’s there you’ll find old Rick.

I think the thing I admire most, if you can call it that, about Santorum’s campaign was that he actually made it this far and made Mitt Romney’s campaign spend lots of money to put him away. All things considered, it was right for Santorum to drop out now, after Romney made it clear he’d go full-on alpha-male and pee on every tree in Santorum country. So the Romney campaign is committed to a big ad buy in this market for a showdown that isn’t actually happening. Of course, if Santorum was sticking with his quest for the nomination as he indicated with his “half-time” metaphor, this was the right thing for Romney to do.  After all, knock Santorum out in his home state, and he has no momentum and no resources left to go anywhere.  But as it stands, Santorum gets to wind down his campaign having done some reasonable damage to the front-runner’s long-term chances in the general election with an escalatingly negative campaign prior to dropping out, and I note, without an endorsement for him, either.
You know what Charles Pierce calls Santorum? I don’t like to use gendered insults like that, but I concur with the sentiment. And I suspect Romney might, too.

(X-posted at Rumproast.)
Posted by Vixen Strangely at 9:59 PM

Email ThisBlogThis!Share to TwitterShare to FacebookShare to Pinterest
Labels: best of the worst 2012, GOP, santorum

From a purely blogular standpoint, I’m going to miss him, a little, but he’ll never really be gone.

Time for a re-imaging of the Rickroll, with Santorum clips instead of Never Gonna Give You Up.