Thoughts and Prayers, Our National Pastime 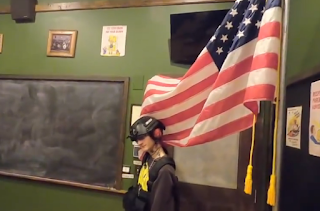 Today, at an Independence Day parade about a half hour north of Chicago in Highland Park, Il., a scion of the town's good folk is alleged to have fired into the festivities, killing six and wounding dozens, and causing the shut-down of other holiday celebrations in the vicinity while the manhunt for the shooter was underway. Robert "Bobby" Crimo, III was later taken in "without incident."

The alleged shooter apparently provided a lot of internet content, which is in the process of being scrubbed and I guess there are reasons not to publicize his little cartoons and lyrics and all. But apparently, red flags existed as to what was on this young man's mind about thinking of doing damage to other people. The above screenshot is from a video he did that depicted himself as a school shooter. The flag symbolism is just something to ruminate over--for now. 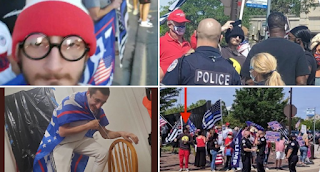 But I want to short-circuit the idea that this kid was antifa because of random dress-up photos or the idea that scrawny little pencil-neck betas are a libtard thing. Waldo over here was signifying badass MAGA wannabe, and that apparently meant embracing the gun--the symbol of dominance and cleansing for an American kid who has gone off the rails and wants to signify his badassery. By shooting innocent folks and causing terror for no clear reason at all.

So, we can offer up our thoughts and prayers now, our numb-skulled thoughts and broken-hearted prayers, that this kind of monstrosity which happens here more than anywhere else, happened here, on this day we celebrate our nation's uniqueness and history. These offerings are our national pastime after all.

We have the ability to change it, but we don't--the lawmakers aren't willing and the highest court is laughably on the side of the crazies, They might as well say an unarmed person, an innocent person, has no right that an armed person need respect. And the justice dispensed to the person judged to have committed the crime will depend on their affiliation and situation. How many little gun-toting motherfuckers look up to Rittenhouse and think they now have a right?

I think we could do better, but I don't think prayer will make it so, but work. I only know that a crowd of people just loving their country and celebrating its birth and our freedoms, scattered as bodies were broken and fear was felt that maybe we weren't safe and free anymore here in the land of the free and home of the brave. And this is sickening.

This random violence doesn't speak to our freedoms, but to a culture that thinks violence is an answer to vague and unnamed problems (or even very specific and racist, misogynistic, or political ones). We need civility, fellowship, education, and mutual respect, critical thought, and a belief in one another, not this idea that "others" need to be snuffed out.

This shooting was a sign of a sick culture--but the answer is available. We the people can decide we've had enough. It's been done before.

UPDATE: Now in my city, too:

Several people ran from the Benjamin Franklin Parkway as police responded to reports of officers being shot near the Philadelphia Museum of Art. NBC10 has reporters at the scene covering this developing story. https://t.co/ENHBeVda4k pic.twitter.com/QNxDlIpCKR

We are not right in this country, We are FUBAR.

Speaking from experience (way back in my hippy daze), smoking pot is about as anti-violence pastime as you can get. Not sure how the Ingraham's of the world claim otherwise, but I'm guessing that she and they have never been "experienced."