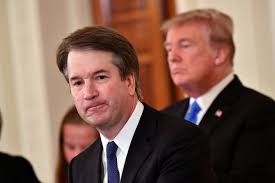 According to Michael Wolff's new book, Landslide, about the end of Trump's presidency, there's a quote from Trump that is going to buuuuuuggggg me:

“Where would he be without me? I saved his life,” Trump said in an interview with Woolf. “He wouldn't even be in a law firm. Who would have had him? Nobody. Totally disgraced. Only I saved him.” The ex-president raged on: “I can’t even believe what’s happening. I’m very disappointed in Kavanaugh... In retrospect, he just hasn’t had the courage you need to be a great justice. I’m basing this on more than just the election.”

Okay, then. Brett Kavanaugh was a DC district court judge, so even if he wasn't appointed to the Supreme Court, he would have had a job, right? He wasn't knocking on the doors of law firms looking for something a little more certain in case this whole lifetime appointment to a federal court bench thing didn't work out, unless I'm seriously, as the kids say, tripping. And, you know, Trump talks trash about people all the damn time whether it makes sense or not. Unless....
You see, although a lower court has to dismiss 83 ethics complaints against a sitting member of SCOTUS, mentally, I can't.  I can't quite drop the idea that there was something shady about his appointment. Especially about how Kavanaugh's debts got paid.
Sure, it could be nothing, but my axiom regarding TrumpWorld is, "If it looks bad, it is bad."  I mean, Stephen Calk was just found guilty of bribing very criminal but very pardoned Trump former campaign manager Paul Manafort with risky bank loans to obtain a role in the Trump Administration. That's the kind of people that were around Trump and a certain way of doing business.
The difference here is, Republicans got very damn cutthroat about judicial appointments, didn't they? They clearly did not seem to give a single solitary shit about any kind of ethics or moral complaint about Kavanaugh's appointment. They were going to by God have this guy on the bench.
A federal judge serves "on good behavior" It takes a shit-ton to get a federal judge impeached. But when Trump says something like "I saved his life" or "I'm basing this on more than just the election", it really makes me think.
It just really does.
at July 14, 2021

The word in my circles is that he is corrupt. A pathetic D.C. beltway loser. A rotten manchild with no values. A criminal.
A lasting legacy that trump left us to deal with.
Zero respect for that guy. He could have had a nice life. Family, garden, friends, helping the community. Instead, he chose this. No respect for this turd.