The Republican War on History 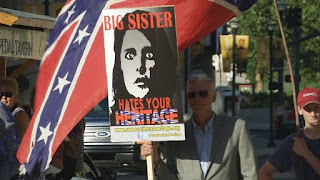 I guess I want to open this one with Nikki Haley (who may or may not be thinking of running in 2024, keeping in mind she would definitely step aside if Trump wandered into the race), who is critical of critical race theory, as she told Dennis Prager. Because it makes white kids sad. Because you know, there isn't anything so depressing as being told people with your same skin color are basically criminal and capable of terrible violence, I guess? You know, the way people of color are sometimes depicted, too--because racism exists, and Nikki Haley sometimes knows it, and sometimes, when it is convenient, she would prefer not to.

After so painfully informing us that tearing down statues of Confederates and colonizers was a form of "erasing history", Republicans are now preferring that some history not be specifically taught because it is too controversial.  From Tennessee to Arizona, state legislatures are trying to stop the teaching of critical race theory or the 1619 project, even though it isn't always clear that the people trying to ban these things know what they even are.

I mean literally, they don't know thing zero. Just recently, a lawmaker in Tennessee somehow got the idea that the 3/5th compromise had something to do with representing Black people and trying to end slavery, instead of being a way for the white men of slave states to gain additional representation according to the number of Black bodies they held in bondage. This is more than mere ignorance of the facts, but a case of someone who, even with the facts laid out before them possessed an utter inability to place them into context.

But this isn't rare. A Louisiana legislator alleged that there were fine points to slavery. More than one. Actually. But despite what we think about slavery, it isn't even really over in this country. For example, the carceral system, even enshrined in the Constitution, permits a degree of slave labor. Who today argues against raising the minimum wage, or even argues about whether one should exist? (After all, what is unpaid and low paid labor but a form of reducing choices, creating dependencies?) And we also deny full citizenship rights in this country, such as voting rights, to felons--but who in the US is more likely to run afoul of the law? Even explicitly due to racism? Even explicitly to disenfranchise them? Or even lose their lives in a conflict with the law?

Critical race theory is basically just connecting dots that actually exist, in the way that the 1619 Project is just covering actual historical events like slavery, colonialization, segregation and so on, without the whitewash. As near as I can tell, some Republicans aren't even mad about critical race theory as such or whether it's Marxist (because come on--is that so wrong?) as they are with the teaching of any Black history when it isn't even February. (And don't get them started on leap years!) They want to be the party of Lincoln, but not acknowledge what happened next, and after that, and so on. What happened after 1964 Or 1965.

I don't think I'm ok with the idea of ignoring the loud signaling on the right that we need to not call things what they are for the sake of "unity" or bipartisanship, because that's how massive steps backwards get made. Especially not when they are actively trying to disenfranchise people based on race, right out in front when we're looking right at them, and aligning themselves with avowed hate groups and have haters and conspiracy theorists run as Republicans.

The question that has been recently posed: Is the US a racist country? is really inadequate to discuss where we are. We are definitely at a crossroads. We have a past that is racist. Racism exists in the present day. The question to me really seems to be--can we work to eliminate it? Racism can not be necessary to what it is to be American, and to live up to our democratic ideals and in the interests of justice under the Constitution, we should act to be anti-racist. But as Ibram Kendi explains, you have to chose--racist or anti-racist. To be neutral implies consent to the system of racism. And yes, it exists as a system. It has been enshrined in law, even in laws we forget the origination of, and is perpetuated in implicit bias--the kinds of things we think, but don't think about.

Republicans also have a war against the word "woke"--a word that as a white person I know was not ever meant to be put in my mouth. The idea of wokeness has existed as a form of situational awareness for people about the means of their own survival existing in a hostile dominant culture. Conservatives have now landed on "Woke Island" in full combat gear, to fight against the reaction to their Plymouth Rock forebears. They have been made uncomfortable for being called "white" as a label. They should be uncomfortable if that label addresses what they stand for and what they do--whether they stand for white supremacy, or reject it.

My whiteness doesn't bother me (does your conscience bother you--tell the truth?) What bothers me is whether I do right. I think the problem is seeing morality as an identity and not a practice. You aren't good because of whiteness, blackness, wokeness, religion, or any other "ness" or "ism". You have to live your correct life. That means taking in what is and isn't so, and what did and didn't happen. Facts matter, and reasons why matter. Intent matters. Results matter. But in the end, it's what you do. Right now. History doesn't hurt you--it informs, even if it vicariously tears at your soul to know what others have lived through, even if it should tear at you to know what people live through right now. That is the human condition.

But you can not address a wrong, or solve an injustice, by refusing to even confront or name it. To refuse to do so, and to reject naming, shaming, and blaming so decisively, is to share in the wrong by aiding and abetting it. It is a statement of intent to continue.

Posted by Vixen Strangely at 1:40 AM

"Is America a Racist Country" is one of those binary framings, and the GOP loves that angle. Are you for or against America is how they play every question.

The better question to ask: Is there Racism in America?

Answer: Yes. Quite a bit, in fact. Where do we even start...

bt1138,
Well, we COULD start from 1619, but apparently that hurts the tender fee-fee's of the stupid, ignorant, and bigoted conservatives in this country chock-full of racists: THEM!!!!!

My ancestors had no dog in the Civil War fight here in America, since they were probably newly freed slaves in Russia. But instead if being called "slaves," they were known a "serfs."
And they were freed in 1861.
Pretty much the same thing - minus the race part. Serfs were probably 99.9% White. So hereditory class, rather than race.

As presently constituted, the RepubliKLAN Party is a menace to real democracy, real freedom, and real liberty.
It needs to change back fast or be annihilated electorally until they can finally see for themselves that they are the gravest threat to democracy since the order to fire was issued at Ft. Sumpter.
Sadly, I don't believe that's in their DNA.

Students will have to do what I did after 12 years of suffocating Catholic school, they will have to dig out from under it. But that is one hell of a burden to place on students backs. Great post!

Given the gobsmacking lies about slavery in textbooks in use in these shithole states, it's not all that surprising:

Bruce, the first time I ever thought of saying "with all due respect" to an elder was when I was in my teens and my cousin's deep-south-raised husband started talking about states' rights, and going to public school in Philadelphia, I was like, "But it was the right to keep slaves". And it went around and around like he couldn't see it, not because I was a kid and he was thirty-something, but because they educated that question the hell out of him. "What other right did you think they meant though?" It came down to "sovereignty" and I had to quit it. It wasn't a heated conversation, just...mystifying to me at the time, because I had no idea of the difference in what he had heard coming up compared to what I did.