Whether to Bury or Praise 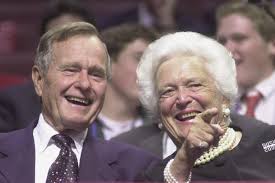 He also benefited by being neither so wretched as Nixon or crass as Trump, and the halo of his dedication was in part burnished by the haplessness of his son's time in office, and the bar of doing politics had dropped to where service and decency, just by being part of one's make-up, were all that needed to be present to gloss over really harsh truths. But his record was mixed, and a pretty damn comprehensive blog post of the not-great bits was served by Erik Loomis at Lawyers, Guns, & Money, so I'd say check that out for the stuff already said, and better than I would have, by him.

As for me, I still simmer over 1988. This was the first presidential election I paid attention to, occurring after Iran-Contra, and in some way, my innocent soul thought Republicans should have been over, for at least this round. How in the world does a country accept Bush was "out of the loop" as a former head of CIA, and not think his principal job in taking office in the White House was to tidy up loose ends? I was all of sixteen and livid at the "pledge of Allegiance" nonsense and the entire crock of referring to Dukakis as an "ACLU card-carrying liberal" as if sticking up for the Bill of Rights was something to sneer at. Stupid wedge issue content (and maybe not the most competent campaign waged by Dukakis and Bentsen) dictated a win, and a pardon for several folks who participated in that debacle of literally extralegally arming a country that we considered a supporter of terrorism, to also extralegally support a faction in a war that wasn't any of our business. And cite the reason for these pardons as "patriotism".

I still to this damn day don't know what American principles or interests were served by this thing. As with Gerald Ford's pardon of Richard Nixon, it sits poorly with me as a violation of the concept that no one should be above the law.

And the nomination of Clarence Thomas, whatever we think of his qualifications today or his sexual harassment concerns, was a slap in the face of civil rights legend Thurgood Marshall, whose seat he filled. As if this bland patrician looked on this black conservative, and gave no fucks for the vast difference in viewpoint but saw a certain blatant commonality, and rolled with it.

I do not know the family or personally, any friends of George Bush. I knew I was slipping as a blogger when I tried to silver-lining the life of his beloved spouse. The War on Drugs,  and whatever crap example he set that made George W. Bush and Jeb Bush the politicians they were,  his poor response to the AIDS crisis, his feints to hardcore conservatism to try and obviate the claim he was a "wimp" which in some ways proved it--all stay in my memory as things that were part and parcel of his legacy, that should not be forgotten.

And yet, in retrospect, he could have been so much worse. And he wrote lovely notes, and his family doesn't all suck, and his friendship with Clinton and Obama....?

He was human, and we are all a mixed lot, and have redeeming features. He did his thing for charity, and I will allow I consider some of what people say about Carlyle Group and the defense industry and drawing arrows here and there from Halliburton/Dressher to the exploits in Iraq seems a bit paranoid. I can't dispute that the end of the Cold War would have been something difficult for any president to navigate.

His family will bury him, and they can praise him as well. As well as can any of his loved ones. I am not in that circle, and I will tell the truth if I please. His civility was admirable. But we should not hurry to polish the reputations of those who have died when their legacies are still ongoing. And the stupid political postures of 1988 still resound in 2018. I can't shrug that off, or forget that Roger Ailes, who made Fox News, was one of his campaign advisors back in the day, and of course, the episode of peak Les Atwater--the Willie Horton ad.

I am dry-eyed and unromantic about his legacy. We are here in it. And my Trump obit will definitely be even worse, come the day. I wish peace of mind to his surviving loved ones. (But not without clear memories.)

UPDATE: And just one other damn thing--he was for Brett Kavanaugh, and fuck him and his son and Brett Kavanaugh. But not the all the way, because none of them deserve the satisfaction.

One of my patients is this elderly Salvadoreno who, since the election, has taken to wearing a baseball cap with TRUMP written across the front. It's not a MAGA hat, it's from ten years ago. My patient used to be a groundskeeper at one of Trump's golf courses, and one day ten years ago as Trump was at the course to play a round, he gave my patient the hat, a warm handshake and a $50 dollar bill.

Trump can be civil to Hispanics he meets in his personal life. Who cares? As president he rides a wave of Hispanophobia that puts toddler Hispanics in cages. Unless you're Trump family or friend, that is all you should care about, his monstrous incivility.

I don't understand the statement here that Bush was civil, in the same paragraph in which the Horton ad is mentioned. Who cares about his civility to people he knew personally, aside from those people? Those people he knew personally are cordially welcome to speak their eulogies to that private audience. But there should be no public honor for this monster from the nation that he abused by helping to make it respectable for personally decent white people to publicly defame black people as a group.