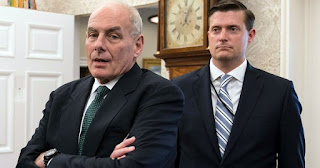 The resignation of Rob Porter after allegations that he has been a serial domestic abuser come to light with a sickening side-note: The White House knew about the abuse allegations, and the impact that those allegations had on his ability to do his job (relating to his security clearance and the potential for blackmail) and they wanted him to stay. This put White House communications director Hope Hicks in the uncomfortable situation of crafting a statement about a person who is allegedly her current romantic partner (a thing I feel almost gossipy about relating, but really--this point is constructive).

The #metoo movement is alleged to go too far, and to appear to be going after people whose shitty behavior towards women is within some kind of acceptable level of shitty, for some value of the importance of their work. This guy, right here, working hand in glove with the White House Chief of Staff, is the exact reason why I don't find that argument at all acceptable. One of these women Porter is alleged to have abused  got told that the reason she should rethink her allegations regarding his mistreatment and violence was a consideration of his political ambitions.

In her blog post, Willoughby wrote, “When I tried to get help, I was counseled to consider carefully how what I said might affect his career.” She told The Intercept that she had described Porter’s anger issues to a lay official in the Mormon church. She said the official had told her to think carefully about what she said publicly about Porter’s behavior. “Keep in mind, Rob has career ambitions,” she recalled the official saying. (The press office at the Mormon church’s headquarters in Salt Lake City, Utah, declined to comment for this story.)


The career ambitions of an abusive person should have no relevance upon whether the suffering of that person's partner should be given credence or whether that person deserves a reckoning. But this is how this got played. There are two women this guy was married to who can present a story with some credibility, that this is a privately violent human, He might clean up great and do a nice job at the office--but he deep-down sides with dehumanizing his intimate partners. That needs to matter.

It doesn't seem to matter to this White House.

I worry still for this guy's ex-spouses, because at least one had been reached out by him for the purpose of trying to mitigate this story, and she said no. We know intimate partners and former intimate partners of abusive men can be in real danger.

This White House never did take the claims against this person seriously, anymore than his former employer did.

Women's lives matter. Domestic abuse is an indicator of this guy's bent regarding the value of human lives--including immigrants, a critical population this guy delivered stories to the president about. One who dehumanizes his own intimate partners doesn't strike me as the best spokesperson regarding anything at all.  I am glad he resigned, and appalled that he was defended from the White House. As if in some way, they sort of did think abuse was quite all right.

The Mormon Church took a dismissive , patriarchal stance with an abused woman??