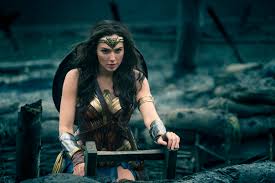 I'm going to put my hand up and admit to the ugly theater-cry phenomenon of just having a superhero movie that does origin without forgetting to also be about something, that shows a woman as hero where her gender isn't treated like an oddity, where bravery can be about protecting and caring and wanting to do the right thing, and strength is shown as being just as much about what is going on inside of a person, as what they can physically do.

Diana of Themyscira comes from a place and time outside of the 20th century larger world in which she will have her adventure. She is from a world where female excellence is actually the only kind she knows of. And all Amazons strive for it. Her world is disrupted by the outside world at first, when American spy Steve Trevor crashes into the beautiful water of her island home, and she rescues him, seeing for the first time an actual male bodied person. She then is introduced to the world from which he came in the form of the enemy army that followed him through the rift and, despite not even knowing where they are, respond to the Amazons with violence, killing several, including Diana's aunt, Antiope, who also trained her in martial skills.

There is something compelling about the idea of a feminist paradise where the world crashes in and needs to be dealt with. We are treated to the image of feminine strength and grace, a system that seems to be monarchic but at least somewhat democratic (there is an Amazon referred to as being a senator) and a justice system backed up with a truth-compelling lasso (which seems a little like a torture device, but it's magic, so I'm gonna buy-in that truth-compelling, even if my little US Constitutional heart says "But you can't even plead the Fifth!" is somehow working for them--maybe their society has the sense to ask contextual questions to determine if laws are broken for the right reason? )

Diana, once she understands that people are dying in a Great War, knows that even though it doesn't need to be her war, it is. She can not ignore the tragedy that she knows people are experiencing right now, and she wants to confront who she knows must be the culprit--Ares, god of war. She goes from knowing nothing of the greater world, to wanting to take on a god on its messy, violent, unbeautiful behalf. She doesn't do heroic in half-measures.

There is the "fish out of water" entrée into early 20th century sensibilities, where she discovers that her body should be covered, and her opinions even more so. Only her well-trained mind and gift for languages lets her be treated, momentarily, as a person to be listened to, but only then as a talented secretary of some male. She views confronting evil as a quest, but comes to see that it is everywhere. There is always ugliness, and suffering and people getting screwed. And then there is the No Mans Land scene.

She learns that there is a village just the other side of No Man's Land where people are being horribly abused by the ravages of an occupying force. This outrage falls so far from her Amazon upbringing, is so punitive and simply wrong, that her outrage compels her to draw fire and step into the thick of a brutal killing field, where she could catch bullets, but she is not going to, because she is a hero. She inspires others to break over the line, and moves an army forwards. She and the ragtag band of Trevor and his awkward team save the village (only to see it later be destroyed).

Wonder Woman is about being a hero who sees injustice, and wants justice, who sees wrong, and wants it righted. She will just do the right thing, because sticking up for the people who can't stick up for themselves and being that person when no one else will is her job. There is an exchange between her and Steve Trevor, where he tries to explain why his world is so screwed up but still worth defending--"It isn't about what people deserve, it's about what you believe". Because people aren't always great and good. But you have to believe it's there inside them. She gets it.  He, very finally, expresses it, and her understanding of him, her first love, as a man willing to live and die by principles like that, give her the will to do what she needs to do.

I loved that movie so much because it really was about justice. It was about whether human beings are worth the trouble we need to take to save us. We are. If there are ever any heroes, or anyone who has a heart. They make us that.
at June 11, 2017

I am going to have to see this in the theater... tomorrow is supposed to be meltingly hot, a perfect day to cool off at a movie.

If you have an appropriate age daughter, take her with you