We Want an Accurate Appraisal 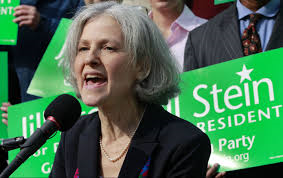 I've kept off of Green candidate Jill Stein's case because for a lot of reasons, but primarily, I don't begrudge her her thing. The Green Party to my mind isn't as likely to tilt the political conversation leftwards so much as it leeches votes from the actual, functional left-leaning party, but she believes in a more diverse, honest political system that is less ruled by corporate money and more geared towards addressing real issues--climate change among them. Her goals are admirable.

And now she has done a pretty admirable thing--the Green Party has raised $2.5 million to request a recount in Wisconsin, and will also try to raise money for recounts in Michigan and Pennsylvania.

There's reason to be skeptical that this will make a difference,  but this election year has been so absurd and weird that I honestly think that if serious questions about the accuracy of our vote totals are raised, why not have a recount? (Note that, re: the McCrory story below, I still consider a recount a fine thing--I just question his claims against the backdrop of voter suppression he'd already been involved with.)

I believe that, after Mr. Trump so vehemently argued that the voting was rigged against him, he would understand that many liberals have come around to seeing at least one thing his way. Maybe there is a little uncertainty. Maybe we should find out what the heck is going on. After all, if he truly has won, a recount could hardly hurt him, right?
at November 24, 2016

Seems like this challenge, which is as quixotic as Stein's campaign (she's consistent, woohoo!) is more ironic than anything else. Stein contributed, in very small part, to Clinton's loss. Now suddenly she's making an anemic effort to somehow repair the damage. Sandy Levinson has a more effective idea--and it's not going anywhere either. The folks who, election after election, avoid the good while searching vainly for the perfect, ought to just learn a lesson now and then.

I have no problem with counting the votes. I DO think Stein is a lunatic, hardly representative of the Greens in Europe, and I'm very suspicious that her 'fundraiser' is a scam, but again, never a good reason NOT to count the votes (think 2000).

That said (twice), I have two problems with this undertaking. One is the serious question of whether we're doing this because we think there's a real reason to do it, or because we don't like the guy who won. We KNOW there would have been all sorts of screaming for recounts and accusations of voter fraud had Trump lost, and I'm just not sure I want to react the same way they would have.

Which leads us to the second problem - this 'evidence' of tampering. It's really quite nonexistent. Somebody's statistical models for interpreting noisy and historically inaccurate exit polling with actual results don't seem to align. Well of course not - they never do. And polling data at the end of the campaign was a mess (thanks Comey!).

I'm convinced that Trump won narrow victories in the Electoral College in a few traditionally Blue states in the rust belt by appealing to a certain kind of tribal/racial anger and resentment. But even so, he DID win them.

One thing I am very comfortable with is America's ability to hold elections. There is a growing wave of voter suppression which is pretty much as American as apple pie, but the elections themselves are pretty much above board. We don't need soldiers and tanks in the streets, we don't have 'election day violence', and we don't have an autocratic government that stuffs the ballot boxes. At least up to now, a pretty trustworthy institution...

Hi Vixen (and hi mikey too), I hope everyone had a good Thanksgiving. Unfortunately, I had to have a tooth pulled and was having to drink soup while the rest of the country was eating turkey. (Has anyone ever looked at Thanksgiving from the turkey's point of view?)

I listened to a few of Jill Steins speeches, and I heard a lot of inflammatory denunciations tinged with hysteria, but I never heard one solution, or even suggestion of a solution, to any of the real problems that need to be solved. She sounded like a lot of rhetoric that went on in the 60s except that in the 60s we often at least had a prescription for remedy. I was in a few actions that ultimately resulted in some urban renewal, for example, although we never had anything but suicidal ideas about international solutions.

I fervently believe that the left can rescue itself from the prospects of being a regional, bi-coastal party. But it's going to require broadening the base and finding a tactic that is not basically insulting people who might vote for you. Congressman Tim Ryan, who is running against Pelosi, has some good ideas that would help the Democratic Party to become more competitive, but it will require Democrats to start stretching themselves beyond their bubble.

Incidentally, with the tallies coming in from Michigan, Trump is now over 300 in electoral votes. Trump's basically Democratic initiative of threatening to levy a 35% tax on every item imported produced by American companies who moved outside the US is already paying off. Ford is now staying in the US (And Ford hires people with all skin colors). He's working on Carrier A/C and tech companies, and he hasn't even been sworn in yet. Democrats can take satisfaction in this because it is not a solution that comes from the right.

The problem with Trump's version of populism, based on the cabinet picks I've been seeing, is that he's setting up a "meritocracy" based on net worth--there's a lot of rich folks and their enablers and panderers and I think Trump is finding himself up to his ass in alligators, promises to drain the swamp notwithstanding. I do think there is value in looking past ideology as such: it seems to me that a better approach is to look at things as they are and practically discuss things in terms of issues and actions;there's the problem, here's what we can do. This only really works though, when we understand what the problem is and what caused it so that solutions are apropos. I don't know that Trump voters will be getting what they thought they were voting for. I think people like De Vos and Flynn and Ross already are RW ideologues and aren't going to usher in a post-partisan anything.

I've been thinking for a while though, that getting fresh faces into positions of Democratic leadership isn't a bad idea and might be very necessary. Tim Ryan's bid against Pelosi struck me at first as being very like a kid implying it's time to take away Mom's car keys (a little patronizing), but the class-based spirit of what I think my party should stand for does need to pull back from coastal enclaves to rediscover how labor advocacy is done--get people on board with fighting for a better paypacket and benefits from their employer. Get people to stop giving up ground. Fight for things like overtime pay--and recognize that it can't all be about education and retraining--people need paychecks here and now. (I'm for living wage legislation to bring service sector jobs to where manufacturing jobs were, in recognition that service jobs are the prevailing industry.)

I generally don't think Jill Stein is the best messenger of left principles--I just like that she had the gumption to propose the recount quest. I like to see someone show a little fight over something. Now, it might be a quixotic quest, and I doubt it will reverse anything--but it does remove that question of tampering and allow Dems to move forward more clear-eyed over the situation. I always feel like more data gives a bigger picture and a better way to grasp what needs to be done.