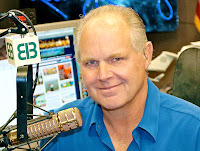 Rush Limbaugh has had a long and prosperous career, hasn't he? Sure, he says horrible things from time to time, but obviously, he has quite a lot of pull politically, am I right? After all, Speaker of the House, John Boehner, when called upon to repudiate Limbaugh's recent characterization of a 30-year-old law student as a "slut", could only tepidly call Limbaugh's words "inappropriate", while many GOP and conservative spox-folks have hopped on the "support Rush" bandwagon. So let's first revisit the slut-shaming Limbaugh has lent his "talent on loan from God" to for the past three days:


“Three thousand dollars for birth control in three years? That’s a thousand dollars a year of sex — and, she wants us to pay for it,” Limbaugh said, adding that high school boys applying to college should consider Georgetown. “They’re admitting before congressional committee that they’re having so much sex they can’t afford the birth control pills!”

The conservative radio host continued: “What does it say about the college co-ed Sandra Fluke, who goes before a congressional committee and essentially says that she must be paid to have sex, what does that make her? It makes her a slut, right? It makes her a prostitute. She wants to be paid to have sex. She’s having so much sex she can’t afford the contraception. She wants you and me and the taxpayers to pay her to have sex. What does that make us? We’re the pimps.”

Nice. Of course, we all know that the Pill is taken daily for birth control (or for other medically-related applications). It's Viagra you need to take each time you want to have sex, if you are a male-bodied person requiring that assistance. That's a drug (and who knows from drugs, seriously?) Limbaugh might know more about. And what she was referring to was not having sex--not that there's anything at all wrong with an adult woman choosing to have sex--but a friend of hers not being able to access the Pill as a drug for health care. And finally, she was talking about how women are under-served by insurance policies that don't include reproductive health--insurance policies being products offered by corporations that we either buy or are provided to us as part of a compensation package through our employer (for which some part of our salary may still go towards the premiums of). In other words--Limbaugh went out of his way to get every conceivable point wrong, just for the pleasure of being able to call Fluke a "slut".  If he did not do that intentionally, he has shown that he does not understand how birth control works, how sex works, how insurance works, and what women care about. He may actually be so ignorant--I don't know.

If he did do that intentionally, well, then, he's created a very nice straw-slut to bash around--but, sorry, Sandra Fluke is a real person, and what she's actually had to say on the subject has been on tv and is actually quite right--a woman's reproductive organs are body parts and need medical treatment just like any other body part. To suppose otherwise is just odd. What else is a uterus, or ovaries? They aren't furniture, or fashion accessories!  By calling Fluke a "slut" or a "prostitute", it appears he was trying to dismiss her opinions with an ad hominem attack and to bully her into silence by savaging her reputation.

I like her reputation better than Rush Limbaugh's.  I like it better than Bill O'Reilly's. I like it better than Mary Matalin's, Or Dana Perino's.  Or Ace of Spades'. Or Michelle Malkin's.  I think it's odd that they all feel cozy slagging the access of any woman to determine what medical care she should have access to, with her doctor, through the medical plan she in part pays for. Weren't they all about freedom when it came to the health care debate? So then, what about freedom to select the Pill for her care, and have it be treated as any other drug?

But this isn't about "birth control"--isn't that what the GOP has been trying to say all this time? Very well, then. It isn't. It's about silencing women. It's about shaming dissenters. It's about telling someone they will be ruined for having the "wrong" opinions.  And maybe it would work if Fluke was alone--but she isn't.

The Right wanted a straw-woman--the Left is about at their last straw.  And this time, we're calling sponsors, taking names, calling Limbaugh out for what he always was--but this time, it's just enough. Enough hate, enough hurting, enough twisting of facts.  He's got no business running this woman down for daring to have an opinion--and this time, he has a fight.