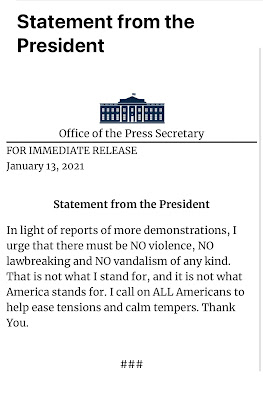 The statement from the WH Office of the Press Secretary is about a Tweet in length and calls for "ALL Americans to help ease tensions and calm tempers" while describing violence as not being what the president stands for, and I do not believe that Trump's fan club will believe it's anything other than pro forma CYA and do whatever they were going to anyway.
I'd like to be wrong. But I think there will still be fallout from literally years and years of conditioning among right wing extremists, even without Trump's overt support.
UPDATE: Post-impeachment, the White House has put up a video of Trump again decrying violence, and it still comes of as a little bit of CYA, a little bit "let's preserve the brand". The New York Times article notes:

But Mr. Trump did not mention the name of President-elect Joseph R. Biden Jr., he did not concede the election and he did not talk about Mr. Biden’s inauguration, which is to take place next week under extraordinary security because of the threats inspired by the Capitol breach. He also made no mention of the impeachment vote.

He did, however, denounce what he called restrictions of free speech, referring not just to social media platforms that have banned him but alluding to the assertion that Republican House members made to argue against his impeachment.

As long as he doesn't concede properly and holds out the illusion that the election was stolen, he isn't really doing anything to defuse the situation he caused. And his claims of being denied his free speech (along with the claims of other conservatives booted from social media) perpetuate grievance and victimhood, while ignoring the larger point that these jackasses as 1) violating the TOS of private companies' site, who don't owe them a platform and 2) fomenting actual crimes.

It is sad (isn't it?) to see that he has fallen out with his very expensive free lawyer Rudy Giuliani in the same article though,

Posted by Vixen Strangely at 2:28 PM