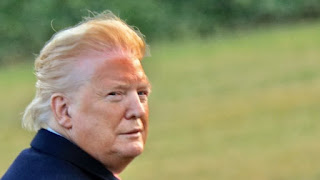 So, the news that the NYT got hold of about 20 years of Trump's tax return information follows a story about how a bankrupt Donald Trump tried to hijack his father's estate in desperation, which follows on Mary Trump's suit against the Trump family for what she as her father's heir should have received, which comes after news that Eric Trump will definitely have to sit for a deposition regarding Trump Org business, and that New York state is definitely looking at a tax fraud investigation against Trump.

This adds to our understanding that Donald Trump isn't so much a self-made man as his father's well-funded failure, and that he's been keeping himself going by various forms of grift, such as using his charity as a slush fund and starting schemes like Trump University. But this week has, among other things, hammered home that the trouble with Trump's finances are also a White House issue, in that he's staying in the taxpayer-funded housing on 1600 Pennsylvania Ave to avoid having to stay in less luxurious taxpayer funded housing. He's grifting taxpayer dollars all the time. And his kids are probably not just following in his footsteps, but are also liable as hell.

Trump never was the amazing businessman he ran on for the presidency, he just played that guy on tv.

If Trump were not elected to the presidency, this kind of financial scenario would make it impossible for him to be given a security clearance because he's basically wearing his leverage on his sleeve. (And he has been! Everyone knows this!) He had to demand Ivanka and Jared Kushner get their security clearances despite what where most likely business-related red flags (of which theirs were the tip of the iceberg to his) as it was.

But the big picture also has Trump scrambling to hold on to the office of the presidency not because he thinks he can do a great job with his second term (he can actually barely articulate what he even plans to do in a second term, which given all he has not accomplished in his first is seriously telling), but because he thinks he is shielded from having to face the music. Someone will shield him from the consequences. The taxpayers, or other interested parties, surely would....

Do what? And that's the problem we've got, yes? Trump needs someone to come to the rescue over his overleveraged ass and he's holding the whole damn US at stake. Winning the White House in 2016 convinced him that that Article 2 gave him special protection and that he owed whoever helped him win in 2016. So it's all very well and good that he says "America First", now (if for the low special customer price of $750 a year) but what exactly is he supposed to say when his notes are due?

Anyways, at his press conference where he took very few questions and definitely wanted to talk about SCOTUS, he said the press should compare his financial statements, which he has released, to the tax information, but I think that's why New York State is actually after him in the first place.

(And not to leave this unsaid, my thoughts are with the family of Brad Parscale, who on this Sunday of all Sundays had some kind of bad patch, and I genuinely don't want people associated with Trump needlessly harmed or self-harming. And I also have Michael Caputo and his family in mind regarding his recent cancer diagnosis, which can spin anyone off their axis a bit. I'm the kind of g who prays for folks so they can testify someday. I'm not without a heart.)

UPDATE: This is also the best place to drop that Rosenstein was probably responsible for reining in the Mueller investigation to avoid info on Trump's finances  (Oh was that link deficient--here) due to it being Trump's red line for blowing up the investigation altogether. But Trump might as well have been saying "Yes, this is where the whole problem is please look at my finances" so?!?!?!?!?)