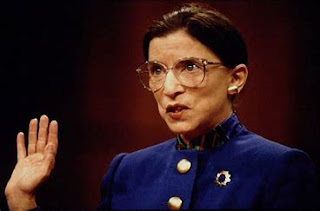 Ruth Bader Ginsburg later in life acquired the nickname "Notorious RBG" (which had to be explained to her as being a take-off on the deceased rapper, Christopher Wallace, AKA Biggie Smalls or Notorious B.I.G.) because she was gangster in her dissents. In her dissent to Shelby vs. Holder, she lit up the premise of the decision, rephrasing MLK Jr.'s comment that the arc of the universe was long but inclined towards justice with the addendum that there must be a steadfast commitment to do the bending. In other words, it inclined towards justice because good people worked to do that. And had to keep doing that work. (And she was right, and that decision was wrong.)

Ruth Bader Ginsburg did that work. When she was one of the very few female law students at Harvard in the 1950's, the Dean asked her what she was doing there, taking a man's place. That same man, Erwin Griswold, later described her work on gender equality by comparing her to Thurgood Marshall. She was a champion of equal protection under the law.

Her business was justice: even when dealing, as she did for decades, with the disease of cancer that took her mother from her when she was still young, and her husband after many years. She kept her spirit and her drive to do the right thing up to the end.

I don't care to blog right now about her replacement, because there are some people who in reality are not replaceable. She supported the rights of people whose marginalization made their rights subject to being disappeared. Her belief in equality under the law for everyone made her a champion for the disabled and for minorities, for women and LGBT people. She stood in the gap for folks to keep the idea of equality alive. She wanted the feet of government off the necks of people living their lives.  Her career and her life need to speak for themselves, without the spotlight of electoral politics for the moment coloring her magnificent career.

She was a person so deserving of the title "Justice". May her memory be a blessing.

Posted by Vixen Strangely at 2:43 AM