They Had a Plan, But the Dog Ate It 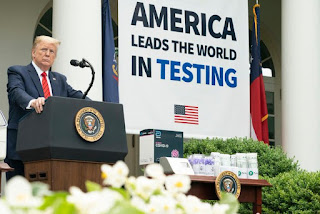 After posting about Rep. Gohmert's positive COVID-19 test with a touch of glibness, I thought I'd steer clear of saying anything about the passing of former presidential candidate and businessman Herman Cain or of the passing of the co-founder of TPUSA, Bill Montgomery, from the same disease lest I be perceived as being disrespectful of the dead.

Some lamented that news reports pointed out that Cain was at the Trump Tulsa rally and boasted about not wearing a mask. I guess I would say to that "It is what it is", under the general precept that a word to the wise is sufficient, but a fool never learns. It isn't victim-blaming to point out that these would be generally regarded as dumb things to do during a pandemic but for politics, and that isn't grave-dancing so much as a word to others.

But the point is--Republicans and Democrats alike are mortal and susceptible to this disease--it doesn't care how you vote, pray or donate your money, it just looks for a way to weasel into your body and mess you up. Nagging liberals aren't trying to steal anyone's FREEEEDOOMSMS, we would prefer people not get sick and spread it around.

The idea that the contagious disease is contagious appears to have been missed by the Trump Administration, though, because they had a plan, but....Jared:


Most troubling of all, perhaps, was a sentiment the expert said a member of Kushner’s team expressed: that because the virus had hit blue states hardest, a national plan was unnecessary and would not make sense politically. “The political folks believed that because it was going to be relegated to Democratic states, that they could blame those governors, and that would be an effective political strategy,” said the expert.

That logic may have swayed Kushner. “It was very clear that Jared was ultimately the decision maker as to what [plan] was going to come out,” the expert said.

On April 27, Trump stepped to a podium in the Rose Garden, flanked by members of his coronavirus task force and leaders of America’s big commercial testing laboratories, Quest Diagnostics and LabCorp, and finally announced a testing plan: It bore almost no resemblance to the one that had been forged in late March, and shifted the problem of diagnostic testing almost entirely to individual states.

See? It was going to stay a blue state problem, and I guess, only the wrong sort of voter would suffer. (But we knew the Trump folks were being partisan about it all, and we also knew Kushner is not, alas, very bright.)

The pandemic reveals the poor leadership of the Trump folks because it is happening to all of America, and Trump is not a president for all of us. But regardless of who he favors, we suffer together.

(And yes, I think the story is a selective leak by someone who might have it out for Kushner and is blaming him....like a dog. But there's plenty of blame to go around.)

Posted by Vixen Strangely at 7:29 AM

>>(And yes, I think the story is a selective leak by someone who might have it out for Kushner and is blaming him....like a dog. But there's plenty of blame to go around.)>>

Dontcha just love it when the bad guys stab each other in the back?

I think it's a quote from Justified, but wherever it's from, it's a propos " when you sow the seeds of suspicion in a garden of assholes, you never know what'll come up. Don't need to buy popcorn as I already have enough

Sounds a bit like genocide to me but, what do I know of genocide? No smallpox for the dems, this is the 21st century. It may not have been manufactured and released into the wild by Israel, China, Russia or US, but the way it's being allowed to spread it may as well have.

[For the record, and I have published this here and there, I think it as likely manmade as thawed out of the tundra or glaciers. Both are remote possibilities but bat to under-cooked dog to human in a stressed environment makes sense]

Yeah, to dust off some 9/11 truther slang, I think one of the reasons the Trumpies are interested in pretending China MIHOP'ed it is because they LIHOP'ed it. It's as if they all didn't mind the idea of negligent mass homicide/genocide, but are skittish about taking the actual responsibility for it. Just like Trump himself playing footsie with Putin over foreign policy and China over trade, he couldn't figure out how a dumb virus could betray him.