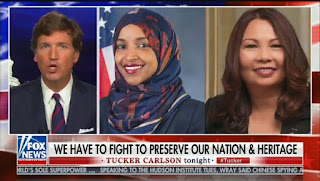 Even though one of the recurring themes of my blog is the widening gulf between the right and the left in this country, it came as a bit of a surprise to me to see a recent story that suggested that Fox News white supremacist and trust fund douche nozzle Tucker Carlson was under serious consideration for a 2024 GOP presidential run.

I mean really, sure, Donald Trump has a lot of BIG White Supremacist and Trust Fund Douche Nozzle energy, but is that the direction they think is....good actually? Because it really sounds like it is. The blather about "blah, blah party bankrupt and blah, blah swamp" really sounds to me like someone uncomfortably assembling a fig-leaf jock strap expecting to get hit in the jollies with the sad truth: The GOP has been selling tax cuts and bigotry for so long it forgot there ever was anything else. And no one stands up for free trade, or talks about the debt, or worries about Russia or national security, or basic fucking competence in the face of a pandemic, because they are all little people milling around Trump, who is an idiot. And they will do the same for Tucker Carlson, who is a younger, better-looking idiot?

The idea should be appalling. But this was seriously put forth, so, let's really look at Tucker Carlson, right the fuck now. Because he's shitting on a Somali-born Muslima congresswoman who is speaking up for ending oppression within various necessary systems (she is not, however, calling for the end of the entire US way of life, but thanks to multiple conservative media outlets and several high-profile elected figures like House Minority Leader Kevin McCarthy for letting us know that they consider oppression and the American way of life are so neatly intertwined--I, like Rep. Omar, want to believe we can very well do the American Way without oppression--thanks!) and calling a decorated Thai-American US Senator and veteran Tammy Duckworth every damn nasty thing he can think of.


Carlson makes sure that he frames his diatribes against Omar and Duckworth in the context of "our nation, heritage, and culture" as if this was not also their own nation as citizens, as if they were not a part of our culture, even though they are right now part of our political landscape. His version of "our" seems a lot like the "fourteen words" if you were to ask me.

Is it any coincidence they are Democratic women of color? (I don't honestly want to say I know for sure, but you all can think about it yourselves.)

After all, we can only talk so much about his racism, but to what extent do we mention his misogyny?  Because that is also a really big thing with him.

The man is toxic waste, somehow granted the opportunity to expand a daily two-minutes hate into fifty minutes interspersed with "My Pillow" commercials, by a Roger Ailes' zombie-brain directed Republican propaganda outlet.  There is no way this should somehow convert into a political career.

I also never thought Trump would be president either. I hope he drowns looking up at a light rain with his mouth open like the brain-damaged prat that he is, but I'm probably going to be scratching my 2025 mea culpas into the dirt of the gulag they toss us feminazis into. Ah well. It was great blogging for you .

(I mean shit, Republicans--really? This fuck-head who can't get a big-boy haircut and was only shamed out of George Will-ian conservative-cosplay bowtie-wearing by Jon Stewart--this signifying assbite?  This guy? This dress-up clown. He has no scruples or shame and is doing it for the looks and the LULZ. If there's nothing left--turn out the lights.)