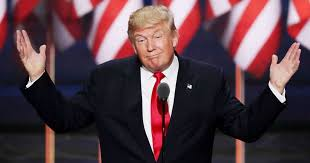 Trump doesn't take responsibility. He does things, all right, but he lives in a universe of diminished consequences. People settle out of court, exhausted by him. He goes bankrupt (through his own incompetence and more than once), but still lives like some demi-royalty (whilst hard-working people can easily struggle through no fault of their own, but the machinations of folks just like Trump). He gets people to sign NDAs so they don't rat him out--even his own family. He creates a kind of squid ink of lies around himself so that there's a cushion of implausible deniability--sure, sure, he's clearly a racist, a con-artist, a half literate and a creep according to the fake news media--but what if he wasn't?

So, did he know about the bounties Russia had on US troops and UK troops in Afghanistan payable to the Taliban? Trump and already-proven liar WH spokesperson Kayleigh McEnany say of course he didn't. News reports are starting to really corroborate that of course he was told.  But what does it mean that Trump was told? Was he given something to read? Was he verbally told? Did he grasp the whole deal?

Who can say? We are presented with the appalling spectacle of a person who might not take in information whether read out or spoken, who is bellicose to allies and fawning before dictators, who has a probable vault of "perfect calls" that are by no means perfect, or are, in fact, "abominations":

The White House did not respond to a request for comment before this story published. After publication, White House deputy press secretary Sarah Matthews said, "President Trump is a world class negotiator who has consistently furthered America's interests on the world stage. From negotiating the phase one China deal and the USMCA to NATO allies contributing more and defeating ISIS, President Trump has shown his ability to advance America's strategic interests."

One person familiar with almost all the conversations with the leaders of Russia, Turkey, Canada, Australia and western Europe described the calls cumulatively as 'abominations' so grievous to US national security interests that if members of Congress heard from witnesses to the actual conversations or read the texts and contemporaneous notes, even many senior Republican members would no longer be able to retain confidence in the President.

These two paragraphs of this CNN piece from Carl Bernstein (!?*) are from different universes; one, the spin universe of those who still think you can polish a wet one, and the reality of those who ruefully admit the solidity of the excreta is beyond burnishing. If the Speaker of the House had the will and the time, we'd be totally up for more impeachment trials, and I entirely wish it could be so. But it would take years to unscrew all of Trump's impeachable offenses (although please! they could try for some of AG Barr's!)

But here's something to ponder: just today, Iran submitted a warrant to Interpol for the arrest of President Trump and 30-0dd other folks for the hit on General Qassem Suliemani. Ok, it isn't gonna go anywhere, and nice, troll, Iran. But recall that this assassination occurred right in the midst of the impeachment, and Trump tried to minimize the resulting casualties from the subsequent attack on our bases in Iraq. He doesn't like to admit things (like, say, our current Covid-19 crisis) are as bad as they really are, because it reflects on him. He also doesn't know what to do about anything, so everything gets worse.

He's a bully, and ignoramus and a head case. Many Republicans are covering up for him. I guess they are also in extraordinary and even delusional denial.

UPDATE: * Because how many journalists have the presence to be about to bring down two presidents during their careers, right? And this glimpse into Trump's modus operandi should be fatal.