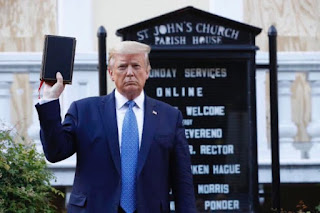 This is President Trump, with his trademark hair pancake, wearing his most serious facial expression, holding aloft, to be clear, "a Bible, not his Bible", in front of a church he did not go in, having gassed peaceful protesters to get there, to vow he'd do something. Because if he didn't do something, why! How useless he'd seem, right?

Except he still hasn't actually performed the leadership the moment calls for, really. I mean, okay, swirl around, as multiple Twitterati have noted, a book one hasn't read, to stand in front of a building one has no use for--to declare a threat of martial law (posse comitatus, anyone?) against protesters and vandals alike, which is kind of not very Constitutionally-oriented?

To what purpose? Did the protesters get anything from that other than the certain knowledge they have been told their point of view doesn't matter? Did he show understanding and mastery of the situation? He earlier berated governors to "dominate" the protesters so that they did not "look like jerks."

That feels like a bit of projection, really. He's yelling at them because he thinks the protests make him look bad, just like he berated governors over the COVID-19 response. He wants them to make a violent response happen because he doesn't know that this would make things worse and because he wants to feel less impotent. And he's clutching the Bible like a crutch to--

Explain why he'd play Pontius with every protester body? (Whatever you do to these, you do also to whom?) Isn't using the Bible and the church this way a mockery? Isn't urging others to act a verification that he relies on others to make himself look better?

See, I get why propagandists at Fox News (or Scott Walker, former WI Gov, because he's no better than)  might think his exiting his gopher hole in the White House to perform "in-chargeness" is an act of bravery, because I assume it's in their contract to. But when I see this image:


President Trump pumps his fist as he walks between lines of riot police in Lafayette Park across from the White House while walking to St John's Church for a photo opportunity during ongoing protests. More photos from Washington: https://t.co/latl1eCZTE 📷 @tombrennerphoto pic.twitter.com/qlkVltyXKR
— Reuters Pictures (@reuterspictures) June 2, 2020

I see a man so insulated and protected he has no reason to fear but who lives in fear regardless, because, in a nutshell, he has bad dreams.  Anything at all disrupts his ambition--not in the least, anyone lifting up the curtain to notice he isn't great and powerful at all, at all.  And who will attribute to him the brain, the heart, the courage, to do what we need?

He should click his heels and go home already. Resign!

Posted by Vixen Strangely at 11:58 PM