What a Fool Believes

AG Barr seems to tells ABC news that the President’s tweets make it impossible for him to do his job pic.twitter.com/aEe59s5JRC
— Acyn Torabi (@Acyn) February 13, 2020

So, where I left the Trump saga in the last post, he had just actually Tweeted an extortion about New York state: 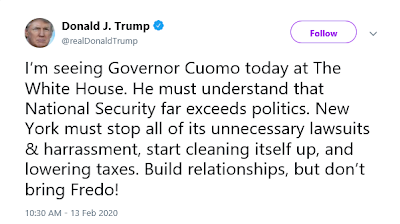 At this point, I don't see how one can not take it for what it is (I guess we'll hear more from the governor). But as to the claim from Bill Barr that he sure finds Trump's Tweets make it hard to do his job and undermine his Department if Justice, goldarnit, color me a bit skeptical. My interpretation of that, at face value, is like the whinge of GOP senators who feel called out from doing business as usual, he resents being put on the damn spot. Can't he get somewhat through at least one cover-up before Trump is either openly congratulating him on it or starting a new crime wave? What's next, telling everyone he sanctioned whatever Giuliani is doing in Ukraine because he doesn't trust the US intelligence apparatus not even a little bit? Hoo boy.

But because I assume Barr has a little more on the ball than the impulsive Mr. Trump, I think it's more of a bit of public relations CYA on his part. People are calling for Barr's head, and it does look like he's performed with no small amount of impropriety on Trump's behalf. The NYC bar is calling into question Barr's partisan, Trump-protecting activity. His desire to weigh in regarding the prosecutorial work of DA's in progressive communities has been blasted by many professionals. (The remarks on his part, to this effect, fit into a general pattern of the RW taking against all things George Soros is involved with, even though supported by people like Charles Koch as well, and are referenced positively by President Trump--if awkwardly and sandwiched between ruminations on killing drug dealers.)

When Barr proclaims that he will not be bullied by anybody, he is possibly trying to assert that the DOJ is not corrupt, or at least, he isn't, regardless of whatever Deep State folks are out there. He's figleafing himself to try and avoid the scrutiny that he will face (maybe) when he sits before the House Judiciary Committee March 31. I mean, if he does. Additionally, perhaps he is trying to separate himself from Trump as a firewall against increasing calls by Trump to prosecute his enemies, real or perceived, with nebulous legal basis, and against the reality that the investigation of John Durham might, like the report of DOJ IG Michael Horowitz, not demonstrate any real wrongdoing against Trump, his associates, or the basis for investigation of attempted Russian involvement in the 2016 presidential campaign, beyond some innocently-intended errors.

Or what the hell--maybe Trump is going full-blown Mad King, and even Barr, who not that long ago tried to tell us that anti-monarchism was never the driving force of nascent Democratic, Republican, Federalist America, is experiencing a bit of realization that the dream that we are better off with a virtual legal monarch fails when confronted with such power resting in the hands of one of the frailest of creatures, the piece of work that is man. A thing our Founders did write about extensively, and one would think a scholar like Barr would have known as much.

Alas, as the balladeers wrote "What a fool believes he sees no wise man has the power to reason away." The fool must see the nasty truth for itself.

All these are reasonable speculations. I see Fox News Trump loyalist Lou Dobbs has landed on Barr with both feet. As with wrestling narratives, it is sometimes hard to differentiate a work from a shoot. Does he believe Barr is now a damned institutionalist who won't bend the knee? Or is he helping along a comfortable fiction (which, given the access this WH gives to their virtual cable news house organ--maybe?)