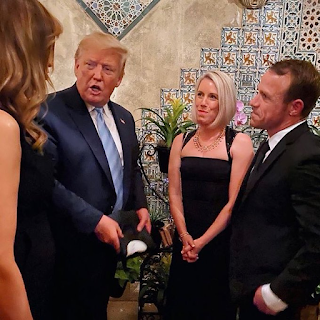 I'm kind of rubbish anymore when you get right down to it--I recall so much of pop culture that I sometimes feel like I am swimming in a miasma of whatever went before.  I guess that's why I think it's a bit weird Trump very notoriously pardoned another Sgt. Calley. in the form of Eddie Gallagher.  It seems like Trump is so obviously trying to signify that he does not care what soldiers do for the greater good of the state (of Trumpworld). And he also doesn't care about law and order if it is his own version thereof.

He makes law and order. They don't exist in and of themselves,  He decides Gallagher acted within his rights and now, this man is one of TrumpWorld's saints. Having performed the miracle of wasting someone.

This reminds me the least bit of the 1990's movie "Wag the Dog" and the story of Ol' Shoe where the figure manufactured to be heroic turned out to not actually be sane or great at all.

Anyway, Gallagher is not so great.

Eventually, the Navy Criminal Investigative Service (NCIS) began an inquiry and the platoon members were called to give evidence.


“The guy is freaking evil,” special operator first class Craig Miller, one of the platoon’s most experienced members, told investigators in sometimes tearful testimony. “I think Eddie was proud of it, and that was, like, part of it for him.”


Miller said Gallagher, who had the nickname Blade, went on to stage a bizarre “re-enlistment ceremony” over the body of the captive. “I was listening to it and I was just thinking, like, this is the most disgraceful thing I have ever seen in my life,” he said.


At his court martial, the panel heard evidence that Gallagher had emailed a photograph to a friend in the US containing a photograph of him holding up the dead captive’s head with the words: “Good story behind this, got him with my hunting knife.”


Another platoon member, medic Corey Scott, said: “You could tell he was perfectly OK with killing anybody that was moving.”

That makes it seem an awful lot like Trump pardoned war crimes because they seemed really cool to him, and that the context didn't really matter to him at all.  Maybe because he doesn't understand what war crimes are at all, or how things like right and wrong work.

I've more or less expected as much.

Posted by Vixen Strangely at 1:53 AM