The Script that Flipped 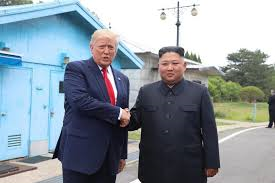 Just so that this does not get lost amidst the impeachment-related stories, Chairman Kim just issued a statement regarding the possibility of future talks with the US:

In a blunt put-down Monday, North Korea rejected what a senior adviser to Kim called another “fruitless” one-on-one with Trump. It was the latest reminder that Trump’s open-door policy for bargaining with authoritarians means those leaders can slam the door in his face.

“We are no longer interested in such talks that bring nothing to us,” said Kim Kye Gwan, a veteran diplomat and Foreign Ministry adviser. “As we have got nothing in return, we will no longer gift the U.S. president with something he can brag about.”

But what about all those love letters? What about the historic DMZ visit?

Trump legitimized Kim and Kim wanted nothing more than that, and nukes. He can have both, and Trump gets nothing, precisely because Trump wanted to accomplish something with North Korea (or to appear to be accomplishing something) so much. In the meanwhile, our relationship with South Korea appears to be impaired.

UPDATE: South Korea has signed a defense agreement with China.

Posted by Vixen Strangely at 7:21 AM