TWGB: We Could Call it "Floodgate" 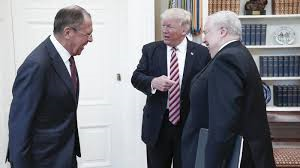 This feels like it's going to be one of those weekends where the news just doesn't stop--given the penchant for the media to call scandals by names ending in "-gate", maybe we could call what's going on now, "Floodgate", for the deluge that is now pouring out.

Regarding TrumpWorld, I've had a little maxim: "It looks bad because it is bad." The White House meeting with Lavrov and Kislyak back in May 2017 looked bad. We knew it was bad when Trump admitted firing Jim Comey to slow the Russia investigation--that was bad! But just now we're hearing that Trump also said that he did not mind Russia meddling in US elections because the US meddles in the elections of other countries. As in, everybody does it, so, um, keep doing it?

This cynical attitude reminds me a lot of how Trump responded to Bill O'Reilly, comparing the United States to Russia, in regards to Putin having journalists killed. He said then "There are a lot of killers. You think our country's so innocent?" As if who doesn't have the odd reporter killed every now and then? Way of the world!  Given the inappropriate things he says in front of a camera with everyone watching, can we really be stunned if his one-on-one interactions are hair-raising?

The White House has known this, apparently since the beginning. We are also now learning that information regarding calls with many world leaders were treated differently after there had been a couple of leaked transcripts. This apparently includes to Vladimir Putin and Prince Mohammed bin Salman. Well, naturally. My best guess for why the air-tight restriction to prevent leaks? It's because they "look bad". And it's because the general situation....is bad.

And everyone around Trump apparently just knows it and deals with it, like the folks who have to listen to him ask for the nth time whether send a nuke to disrupt a hurricane would work, or whether Denmark will sell Greenland to us yet. They hear so much nonsense, that even when sober-minded people like Vice-President Pence suggest maayyyyybbbeeee they don't want to release a transcript of the perfect conversation, he gets vetoed. (Maybe that objection was on Trump's mind when he suggested that people should look into Mike Pence's conversations. He's a spiteful guy, that Trump.)

And Trump just goes on his merry, totally not appropriate and illicit way. Like meeting with Wayne Lapierre and them discussing putting the kibosh on gun legislation in exchange for help in fighting the impeachment. This is happening just as a Senate report finds that the NRA acted as a foreign agent during 2016.  I wonder what kind of assistance Trump is expecting from the NRA--who have been crying poor mouth for a couple of years, now. Maybe he's thinking they'll come into some money--again? (Given all that's going on, I hope he isn't looking for those second amendment people he threatened Hillary Clinton with to come through, but then again, maybe he is. He makes hints. That's how it works.) Trump has also discussed getting dirt on Hunter Biden from China* via intermediaries, so I'm sure those conversations are....just perfect.

(*Why all the focus on Hunter Biden? I think because Joe Biden comes up clean, personally, and because Trump figures the man will do anything to protect his family. Like a normal father would.)