Tilting at Windmills all Day 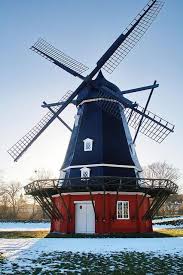 It would strain the credulity of any person living a mere five or six years ago to imagine the kind of extraordinarily and bizarrely stupid day we have had the exceptional weird fortune to witness, and it would blast right past every firewall of the belief system of those people to imagine that, of all the unfathomable sheer stupidity witnessed today, so much of it would be just another fucking weekday under the ruling auspices of Mad King Donald that we'd just shrug it off.  It wouldn't be a DEFCON 1 emergency. Helicopters wouldn't be circling overhead at the White House. It's just....

It's just a fucking Tuesday around here, anymore. Not even Thursday, people. Not even newsdump Friday.

It's just one of those days when the orange-tinted dingus is in rare form and accuses two congresswomen of being profoundly anti-Semitic, mocking one of them for tearing up because she will not be visiting with her grandmother due to a profound personal principle regarding the dignity of her kin. It's one of those days when he then turns around and accuses US Jews of being "disloyal" if they vote for Democrats.

But gosh, he sure said a lot of things today (recorded in this thread by Aaron Rupar, who at this stage, has seen an awful lot), such as reiterating that he really could have ten million Afghanis killed, if he so minded ( he still is not so minded) and offered a repeated belief he has that Afghanistan is why the Soviet Union is now Russia, and that Russia should be in the G-8, and it's only a G-7 and not a G-8 because Putin "outsmarted Obama" which I guess is a weird way to phrase "annexed Crimea" but fuck it, he was rollin'. He also offered an opinion about Kashmir (it's complicated).

Uh, and he's not going to do the background checks thing because the NRA owns his ass (still!) and also the economy is just fine, so people should stop saying it isn't, but in the meantime, yes he would very much like a payroll tax cut, maybe lowered interest rates, you know--a spiff. Which doesn't sound half nervous at all!

And any of those things would have been "Wow! He does not know what he's talking about and says things anyway--is he ok?" Except this is the new normal, right? And then he does this: 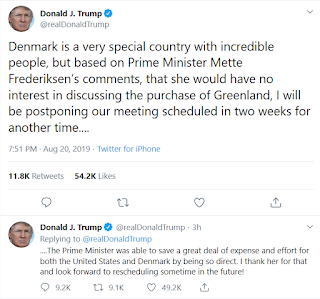 He cancels a meeting with the PM of Denmark because she is not going to let him buy Greenland. And if he's not going there to buy Greenland, what is he even going there for? To look at windmills? Because he's Donald Fucking Trump, and he hates windmills. Everyone knows that!
Andy Kaufman never had such dedication to a cringe bit. If this is a joke, damn.
But if this is not a joke....
Also, damn.
Posted by Vixen Strangely at 11:55 PM