Trump Has a Favorite Dictator and Other Tales of the Decline 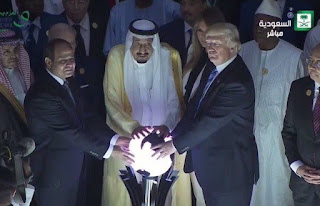 In what will doubtless be a shock to the other dictators, Trump recently (a couple weeks back) voiced the opinion that he did,  in fact, have a favorite dictator (sorry Kim, Putin, etc.!):

Donald Trump once referred to Egyptian president Abdel Fattah al-Sisi as his "favourite dictator" as he awaited a meeting with the world leader, according to a new report.
The comment, detailed in a new Wall Street Journal report, was met with stunned silence from American and Egyptian officials, who had gathered inside the Hotel du Palais in Biarritz, France for this year's G7 summit.
"Where's my favourite dictator?" Mr Trump is reported to have said in a loud voice, several people who were in the room told the Journal.
Those witnesses said that they believed his comment was made in jest, but was nonetheless met with muted response. It is not clear if Mr Sisi was in the room, or if he heard the comment.

That's certainly sounding like a case of "the quiet bits out loud" but wow! This isn't really on the order of "things Trump usually says which are merely stupid" and vaults into the level of "things Trump says (like wanting to purchase Greenland, remember that?) which are both weird and can screw up international relations."

He is, though. The international relationships--he's messing them up. Things like firing (if he did) John Bolton, who I once characterized as a "bloodthirsty loon", would seem great if Trump was not likely to put someone in his stead who was as bad, if not worse.

But to be fair, he's messing up national security all around, including domestically. Instead of a wall that Mexico is building, it looks like we have a wall (not yet!) that the US military will build, and instead of a brilliant deal with North Korea for them to stop their nuclear program, we've got a North Korea nuclear program that, well, we're building, inadvertently, because Trump doesn't understand why we need to build up our cyber defense.

But he also doesn't understand our intelligence apparatus at all, either, which is definitely worrisome. He doesn't believe our links with foreign intelligence offices (like the Israeli contact he blew to Lavrov and Kislyak back in 2017), but is weirdly prone to dismissing the possibility of foreign countries trying to scope in on us. (Which you'd think he'd be aware is a real interest, all things considered. I guess it's my distrust of Netanyahu that makes me see "security companies" like Psy Group as possible cut-outs, but I could be wrong.)

He also seems to have abandoned steering our good friend Russia away from weird nuclear ideas. But what the hell? One of Trump's big ideas was pulling us out of the Iran nuclear deal with his Fox News-inspired fantasies about pallets of cash to Iran, and his genius negotiating tool to get Iran back to the table (that we had them at, already, and got a deal with, already!) is--pallets-worth of credit--$15 Billion worth.

So, a similar plan, with less trust, that costs the US more? Wow! Mr. Art of the Deal! That is really....

Something. It's not good. None of this is good. We can't expect good from Trump, I'm just saying.

He called Sisi his "favorite dictator." He thinks the way he talks on Twitter is how he can communicate in life, and it doesn't even work that great on Twitter.  MAGA-hats--this is your king?  He's actually pretty stupid. Shouldn't that bother you more?