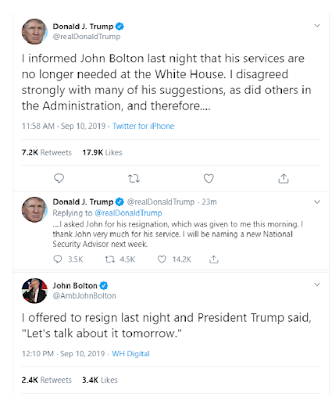 So, uh, Trump fired Bolton, I guess. All I know is, Trump says you shouldn't believe reports of chaos and turmoil in the White House. He literally always says that. I don't know why he has to keep saying that. AT least Trump got Bolton's name right in the Tweet.

UPDATE:  It's a real Tuesday over here!

Posted by Vixen Strangely at 12:32 PM

Nobody ever quits on Trump; he just fires them retroactively.