This is Not Amusing, Either 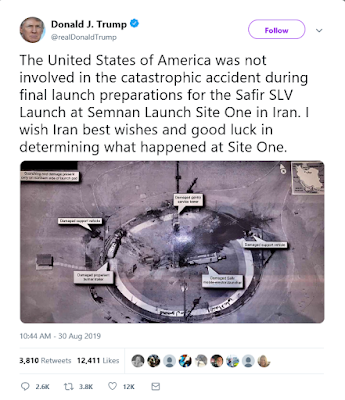 I'm screen capping this because the Tweet probably should come down (although, what the hell, it's already news). Using Twitter to say what this says:

The United States of America was not involved in the catastrophic accident during final launch preparations for the Safir SLV Launch at Semnan Launch Site One in Iran. I wish Iran best wishes and good luck in determining what happened at Site One.

sounds to me rather snarkily like he was implying "Or were we?" And then the picture...is there a possibility that this was classified right until he decided it would be good to Tweet it out to be a shithead? And if so, does he have any clue what other countries can infer from that? (Safe bet, no, he does not.)

This is not normal.
Posted by Vixen Strangely at 2:33 PM