Travel pool was told Trump’s hospital visit was closed to pool because this is “about victims...not a photo op.” But it took the WH just a couple hours to release its own video highlights and photos. https://t.co/rPHYrsrJeP
— Eli Stokols (@EliStokols) August 7, 2019

Although there were people who did not want President Trump to visit either Dayton or El Paso because of a sense that he would make things worse, it always helps to consider that Trump can be on at least reasonably good behavior if there is some promise that it will pay off for him later. As in, he can later say he did something presidential by showing up. His photos from the consolation episode of his presidency are Very Good, even if some of his comments and tweets today were Very Not Good.

Being presidential all the time (or even just basically decent) isn't as easy as some people have made it look, apparently.

This will probably be followed up by being more horrible than usual, because this is another thing I have observed about Trump--when asked to not be terrible, he sort of saves his terribleness up. He is also probably not going to do anything about gun control or domestic terrorism (of the white supremacist variety--I do think he has plans for Antifa, which he pronounces rather exotically, I think). I would love to be proven wrong. My title is harsh but I don't think it's undeserved. 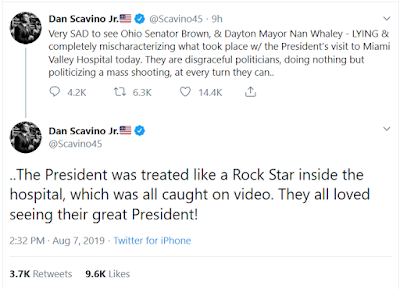 Posted by Vixen Strangely at 12:00 AM