Trump Writes Notes to Himself 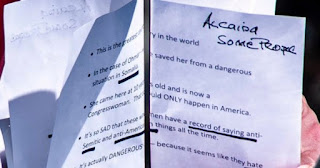 It's not necessarily the dumbest thing about Donald Trump, but somehow, just knowing that his handwritten notes to remind himself of the lying smear-job he was going to hit a sitting congressperson with were rendered phonetically ("Al caida") adds a little wry reminder that this is a person who doesn't read, and bases his strong opinions on things "some people" are saying.

Maybe there's a learning issue involved affecting his curious spelling choices, and I shouldn't judge him for that. But I think we definitely can judge a person who doubles down on racism by adding a lie (not for the first time) that associates an innocent person with terrorism because she has the temerity to disagree with him.

You don't have to like what "the Squad" stands for to understand what he is doing here and know that it is wrong, however you want to spell it.


Posted by Vixen Strangely at 9:52 PM