Kellyanne Conway Is Having A Normal One

“What’s your ethnicity?” Kellyanne Conway asks a reporter when the reporter asks her about the intent of the president’s tweets.

“A lot of us are sick and tired of this country – of America coming last, to people who swore an oath of office.” pic.twitter.com/Tia1VUQluP
— NBC News (@NBCNews) July 16, 2019

Sure, who doesn't ask a reporter about their ethnicity when defending their boss regarding his (checks notes) racist Tweets?

Self-aware people, that's who. People who still had a grip and aren't actually racist might have quit by this point. But damn, she's a trooper.

UPDATE: She has followed up on this on Twitter, and frankly, it doesn't really help-- 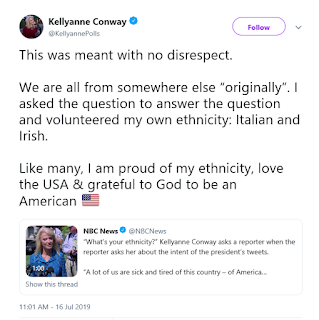 It's kind of a hot mess response.

Posted by Vixen Strangely at 1:24 PM