Trump Boxed In, or Bolton Boxed Out? 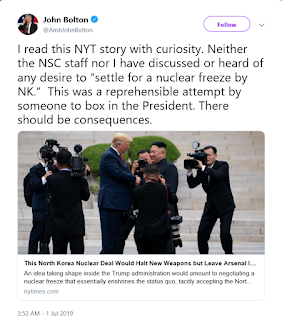 Not for nothing, but NSA John Bolton was in Mongolia while all this was going down, so it's just possible the entire point was that Bolton not be in the know about everything. Trump foreign policy has a history of one hand not knowing what the other is doing. Also, Trump still calls John Bolton "Mike", so maybe they just aren't that tight.

Anyhow, I just think it's interesting (not amusing, not exactly) to find Bolton sputtering about Trump being boxed-in regarding a diplomatic issue as opposed to being boxed-in over a military one.

In other news, Iran has breached the limit on uranium production, which probably would not have occurred if SOME PEOPLE didn't just tear up the agreement that ensured they wouldn't.

Posted by Vixen Strangely at 9:27 AM