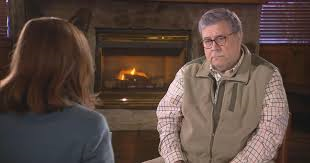 This is something of an ongoing theme I suspect we'll be seeing--the boring normal people who do the worst fucking damage and almost self-effacingly consider it "all in a day's work." You could take a long look at William Barr and suppose he's never cut loose with weird women and wines that foam nor danced with the devil in the pale moonlight, but he's having it eight ways to Sunday with the constitution and giving cover to a wretched excuse for a president.

The latter is worse. This is a creedal nation, and if we don't have the rule of law, we just have the rule of men, and if the men who rule us suck, we are SOL, friends. But for the historical record, Bill Barr does not give a fuck if he is even pilloried and whatnot because of his temporal toadyism. And do you want to know why?

I've talked about this nihilism before, the idea that once we're all dead and gone, what was the point of any one person's bullshit. It seems like the real last refuge of a scoundrel. Forget patriotism or religion, although those have certainly been given lip service to in the commission of heinous fuckery most foul.

But where Barr goes is the heart of dereliction of all responsibility, and the shrugging of Atlas even if a world falls as a result. And not for glory in the halls of Wingnut Valhalla (although he will have that). He does not want the immortality of Homeric hero-song. He's going to tell us (as perhaps he tells himself everyday, as he shaves his face) that this is his job.


He said he knew it would "only be a matter of time" that he would be attacked for what he considers is "behaving responsibly and calling them as I see them." He argued "nowadays, people don't care about the merits and the substance."
"They only care about who it helps, who benefits, whether my side benefits or the other side benefits, everything is gauged by politics. And as I say that's antithetical to the way the department runs and any attorney general in this period is going to end up losing a lot of political capital and I realize that and that's one of the reasons that I ultimately was persuaded that I should take it on because I think at my stage in life, it really doesn't make any difference."
When asked if he had any regrets for taking the job, Barr told Crawford: "No."
"In many ways, I'd rather be back in my old life but I think that I love the Department of Justice, I love the FBI, I think it is important that we not, in this period of intense partisan feeling, destroy our institutions," he added.


So let's "unpack this", as the kids say these days. He says loves the DOJ, and he loves the FBI, and says he does not want to destroy our institutions. He also wants to investigate the investigators and get to the bottom of why the FBI bothered to investigate Russian influence on our elections (which happened) and defends a president who has flouted legal norms and attacked those institutions Barr claims he loves.

He doesn't love these institutions. (Did he ever?) He is doing the job because he has nothing to lose because he is past it and has no political capital to lose, and has drunk deep of the Fox News Lethe waters. He proves himself to himself.

The DOJ under Barr doesn't give a good goddamn about subpoenas or judicial orders.  And even though Barr said once presidential pardons should not be dangled for silence, in light of the recent transcript from former Trump lawyer John Dowd to Michael Flynn's lawyers apparently trying to influence Flynn's terms of testimony, would Barr deny this is even in the ballpark of obstruction?

Here's the funny old thing about evil: Hannah Arendt wrote a very famous thing about the banality of evil. Evil is a commonplace. It really is. Wars. Murders. Shitty government policies. People are ruined by degrees and massacred by inches. They lose their homes because of mere cents' worth of debt. They go to jail because of unrecognizable infractions.  They languish in solitary confinement for reasons of mere identity. The people who carry out shitty actions against other people look so bland and mild and seem so self-effacing. While they watch over women giving birth to stillborn children while in leg-irons, or send drones to an area thick with innocent civilians to stop some supposed terrorists. And they go home and love their families and their pets and are great members of their community and donate to the church jumble.

And there's your Uncle Bill. Bland and not even showy. Just wrong and harmful in his fleece vest and serious expression. If he were your uncle, you'd have unfriended him on Facebook back in 2016 for supporting Trump after the Access Hollywood tape with disparaging comments about the women who said Trump was abusive because it crossed a line you knew always was there. And here he is, running the DOJ for that norm-abusing guy.

Here's why I need Congress to grab Trump by the Article 1, Section 2, Clause 5 of the Constitution; because if you are a co-equal branch of government, they just let you do it. Because there is no respite from DOJ. The Mueller Report was never anything final. Because we need the public to know by seeing on tv the contents of the Mueller report which they did not read.  Because justice should know no Barr. Because there are other reasons besides the Russia investigation that make Trump illegitimate in this office. And because we need to do better for the USA than bland people who believe in nothing, because this country is worth believing in.
Posted by Vixen Strangely at 1:21 AM

Hi Vixen, I appear to be stumbling through your neighborhood. A very fanciful use of the word nihilism. Nobody ever said that you're not creative.

Here's my thumbnail sketch of the present situation. 70% of Democrats want the President to be impeached. 95% of Republicans have enormous appreciation for the President.

Nancy Pelosi faces a dilemma. On the one hand she realizes that impeachment needs to occur to satisfy Democratic voters. At the same time she realizes that to impeach the President is almost automatically to assure his reelection. The whole thing is kind of a catch-22, if you recall the novel.

At this juncture I think President Trump will be reelected, however I think it's as much the zeitgeist as anything else. The zeitgeist continues to move forward. If you have paid attention to the UK, Italy, and some other elections you will see that this zeitgeist is redefining the relationships of countries to the EU.

Well, you know, Vixen, “there are tides in the affairs of men...” and you always need to remember that in the United States the elections go back and forth between the parties, and then there are the longer-term tides.