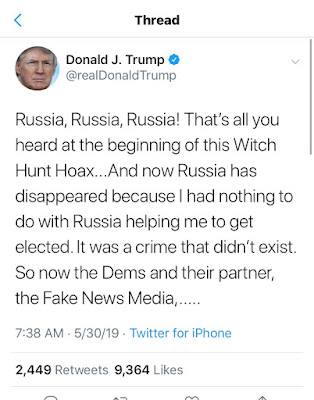 It's so weird that Trump Tweeted, then deleted, a post that seems to admit that Russia actually did help him get elected after denying it for so long, but please take a moment to absorb the plaintive note that they may, perhaps have "disappeared" just when he might be needing them most.

UPDATE:  He's kind of back "on message" now.

The president deleted his tweet to fix a typo, but reposted with this part intact - seemingly the first time he’s ever publicly acknowledged Russia “helped elect” him pic.twitter.com/3QUMBx0YDN


Posted by Vixen Strangely at 8:34 AM