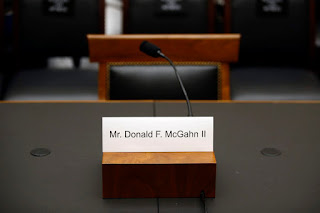 Sometimes, I find it amazing the things that people feel obligated to do over the things they are genuinely supposed to do. Take former White House Counsel Don McGahn, who defied a subpoena out of a sense of obligation, perhaps, to President Trump, despite the real possibility of being held in contempt of Congress and any penalties that might pertain to that.

It's questionable that Trump has a legitimate reason to direct McGahn not to testify--he is a former, not current, employee of the White House, and he would have been questioned regarding things he already discussed in about 30 hours of questioning by the Special Counsel's team. I'm just an old D-list blogger, but that doesn't look like his testimony should fall under anything like executive privilege to me. It seems less questionable, though, that Trump has a less-legitimate purpose in having McGahn refuse to testify; one of the more disturbing items in the Mueller report is that McGahn was told by Trump to fire Mueller, didn't do it, and then was advised by the White House to publicly state that Trump never tried to obstruct justice (even if it seems like he knew Trump did).

If requesting McGahn dodge the hearing is another form of obstruction, we've got like, three layers of obstruction, right there. This is the deeply weird place we're in, where we can just watch this sort of thing unfold in all its transgressive enormity. But why wouldn't McGahn dodge when AG Barr has yet to be penalized for being found in contempt? And there is an additional wrinkle:

If McGahn were to defy Trump and testify before Congress, it could endanger his own career in Republican politics and put his law firm, Jones Day, in the president’s crosshairs. Trump has mused about instructing Republicans to cease dealing with the firm, which is deeply intertwined in Washington with the GOP, according to one White House official and a Republican close to the White House not authorized to speak publicly about private conversations.


Even if McGahn felt no specific obligation to Trump, having his personal career fucked with in this way certainly could have been convincing. (I can't say how well this reflects on Jones Day if they encourage their attorneys to ignore subpoenas over a business issue, you know, if that's what they did.) And he (and Barr, as well, for that matter) may still find themselves in some bother over contempt. (AG Barr seems to be concerned about the enforcement and wants everyone to be very pleased if he offers something short of full compliance which is, I think, pretty cute, but, just no. It seems to me he should have more of an obligation to the Constitution in general rather than to covering Trump's ass.)

There's something familiar in the obligation trap McGahn is in to recently unsealed transcripts of private testimony Trump's former lawyer Michael Cohen gave to House members. He discusses being offered assistance if he stayed loyal:

Cohen said Trump and his legal team dangled pardons because they wanted to keep people in the joint defense agreement. He withdrew from that agreement, he told lawmakers, because “there was so much that was going on, that I had just decided it was time to stop with the lying, stop protecting the president.”

At one point, though, Cohen was exchanging emails with a lawyer named Robert Costello who touted his “back channel” to the White House — Giuliani. “I spoke with Rudy,” Costello wrote Cohen in April 2018. “Very Very Positive. You are ‘loved.’”

According to emails Cohen shared with the panel, Costello wrote that Giuliani saw the “communication channel” as crucial, and told Cohen to “sleep well tonight, you have friends in high places.” Cohen told Congress he believed Costello was referring to Trump.

Trump and his legal team created an environment intended to produce certain results--namely, not being honest and forthcoming when questioned about Trump's activities. There's a word for that.

While I'm on the subject of obligations, though, apparently, a federal district judge and IRS legal staff seem to agree that House subpoenas regarding Trump's tax documents should be complied with. It seems to me that if the law and Trump are in contention, the law really should have the benefit of the contest, but you'd be surprised how many people don't actually agree with that.

Anyway--more subpoenas are being issued. We will just have to see who feels obliged to comply.

Posted by Vixen Strangely at 1:46 AM