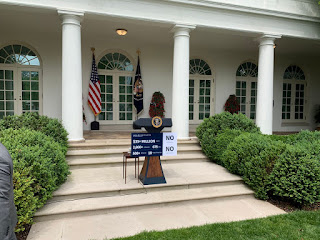 It's hard to fault people for thinking that President Trump's little rant yesterday was anything but impromptu given that there was a printed sign and handouts ready to go--that takes planning (if probably not a lot of foresight). I think it was more like a rig he had ready for some eventuality, but maybe not necessarily yesterday.  Reacting to Speaker Pelosi's comment that Trump appeared to be engaged in a "cover-up" was part of the timed tantrum, but the display also might have provided a screen for him not actually being able to do an infrastructure deal.

And Pelosi got that at once.

Of course, his hand-out and the sign on his podium were misleading. Of course, he had to Tweet later on that he did not either have a "tantrum". And of course, he's basically admitting that he just can't do his job.

But because I'm super petty, I'm just going to point out the damn misspelling of the word "accomplishments" in his handwritten notes. "Achomlishments."

Charitably, I can almost see this word getting spelled this way if he was starting out trying to write "achievements", realized "accomplishments" was a better word, and sort of short-circuited halfway through. But I've been reading his Twitter account for years, and for all I know, that was his very best try.

We've also been watching the last three years of his presidency, and this little episode also looks like some of his very best trying.


Posted by Vixen Strangely at 8:41 AM