He Can't Help It 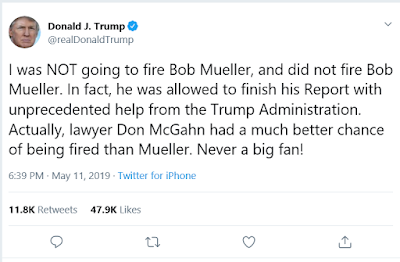 Huh. If you could sit down and think of all the ways you'd probably make McGahn's eventual testimony more likely, you probably still would not do more than Trump did in one Tweet. On a technicality of course, Trump "was NOT" going to fire Mueller--he was going to have someone else do it! I would also question the claim of "unprecedented cooperation". But the point stands that Trump has plainly indicated here that Mueller was safe--

Only who would actually know that, or be able to disprove that? Someone who sat 30 hours with Mueller's team! And with the added dig "Never a big fan!" Is that intended to influence potential testimony?

This....is not the poster child for impulse control.
Posted by Vixen Strangely at 12:06 AM

Odd how often toddler metaphors come up in discussing him.
He is a post-adolescent manque.