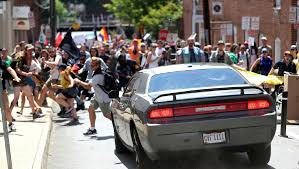 Domestic terrorism in the US has been on the rise. There has been a rise in hate crimes in the US, as well.  The current head of the FBI, Christopher Wray, warns that white supremacist extremism is "a persistent, pervasive threat."

But how does the Department of Homeland Security respond to this "persistent, pervasive threat" to the security of the US? Why, naturally, they virtually disband the unit of intelligence analysts looking into domestic terrorism.

Wait? They stop looking into the actual terrorism that is happening right here in the Homeland? Doesn't that sort of sound like exactly the sort of thing Homeland Security should be doing?

They are too busy not uniting little children with their families when they have been separated at our border, and too busy finding inadequate facilities to hold these people, and too busy tracking the menstrual cycles of teen girls. These things shouldn't seem as important and meaningful to DHS as addressing actual violence and terror head on, and, well, violence and terror are still very near to hand.

(And I hear you, people who buy Trump's line about MS-13 and tattoos and "not the best people". Did you know gangs in Central America recruit at knife-tip and gunpoint? That even people who are affiliated with crime might have reasons to try and change their life? That some people want "not a life of crime" to be an actual valid choice for themselves?)

A White Power symbol was found near the burned-out Highlander Center.  Three black churches burn in Louisiana. And political figures receive serious threats--former Senator Jeff Flake describes multiple threats to himself and his family. Congressman Eric Swalwell shared a phone message of a death threat.  A man was arrested for threatening to assassinate Congresswoman Ilhan Omar.

We are seeing a remarkably hate-charged atmosphere, but there is a theme, and it's one I have been seeing for some time--the rhetoric of Trump, and his racist, anti-journalist, anti-democracy views, that have made his red hat a symbol for far-right extremists. Even if not intended as a symbol for terror or hate, it has become a marker for disruption.  There is a reason why Trump superfans at Fox News demonize a congresswoman in a hijab, or regularly spew the exact line of hate regarding "replacement" that the Christchurch shooter used to justify his massacre, that the Pittsburgh synagogue shooter used, that the Charlottesville tiki-torch folks chanted.

Maybe there is a reason, also, that the NRA supports far-right groups regarding how to manage their message after a massacre. I don't think it's too far-fetched to say that they, too, have become pro-terrorism.

There is a sickness here born of dehumanization and othering. But it is supported by people who have become perhaps so cynical and nihilistic that they dismiss these terrible signs as just another form of negative political rhetoric, and can't see it for what it is--fascism, here and now.  The people who support this crap are, naturally, as Hannah Arendt would say, banal--grifters, attention-seekers, losers. But their dedicated and destructive mediocrity, inadequately challenged, is simply appallingly dangerous to any kind of democratic and free way of life.

I am deeply distrustful of what is happening here.

But if you were to ask certain DHS folks who the real villains were, perhaps they would say Antifa. And they might very well be patted on the head for their service to the state.
Posted by Vixen Strangely at 2:08 AM

Hi Vixen, you know, it's interesting – dramatic changes are occurring all over the world; Britain, for example, and other countries in addition to the US. Naturally, I'm laying odds on it being the new zeitgeist, although I'm not 100% convinced at this point. I would say about 65% convinced.

Well, I am a member of the NRA, and none of my black friends think I'm a racist. Many different races join the NRA. If there are those who believe white people are out to hurt them I will give you the NRA's answer. The NRA believes American citizens who are threatened should have the lawful ability to carry a firearm ti protect themselves and families. The NRA believes in the right to self-defense and those needs don't have a skin color. So actually the NRA is doing more to try and enfranchise people to defend themselves than any other organization. We recognize that bad neighborhoods are some places where self-defense is most necessary. Vixen, we would tell you it's fine to carry your knife around, but it's better to carry a pistol.

When I was much younger I would bump into some people who held a philosophy of white supremacy, but that by no means meant they were vi0lent or activists of any kind.

Today I don't know anyone that I would regard as White supremacists. However, this term white supremacists is not defined. I looked it up once, and it said that a white supremacist was someone who believed that the political power in their country be held by Caucasians. This is very far from the view of the right. The right believes in merit. Dr. Ben Carson is in his position because of merit. Former Congressman Alan West held his office because of merit. Now it would be naive to think that merit always achieves its objective without other considerations diminishing the merit ladder. Still, merit rules on the right. And if there are any of these white supremacists out there wishing that their country had a white political structure, it's not violence.

Antifa, the KKK, and others are simply criminal organizations outside the mainstream of American politics. When I was a kid there were many such organizations – the Black Panther Party, Stokely Carmichael's SNCC, H Rap Brown, the Weather Underground -- and thank God these have mostly been relegated to a brief period in history just like the views of our grandfathers.