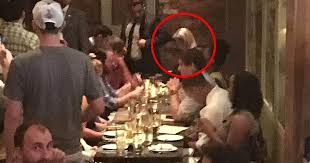 One of the worst moments, perhaps, of outgoing DHS chief Kirstjen Nielsen's tenure was probably the time she sat in a Mexican restaurant and got hollered out by DSA activists. How in the hell was she there appreciating the food of Mexican culture, likely prepared by people of Mexican and maybe other non-US western hemisphere descent, after defending policies that treats these human beings like they are not properly human? Because this is the inflex point between understanding people are people, and not seeing them as such. She didn't think about where she was and how it connected to what she was doing. What was happening at the border was not supposed to intersect with her life.  Who were these illegal entrants to the US, and who were their support group, anyway?

There are so many really bad moments to choose from in Nielsen's DHS admin. Her hearings were closemouthed and clueless. Who admits they don't exactly know how much how much border wall there is and how many kids have died in CBP or ICE custody or acts shocked that separation policy psychologically damages children? She boldly stated that asylum seekers were illegally entering the US, when this is the only way they can seek asylum, and denied there was a separation policy, when this very policy had to be later defended and was rejected by the courts. 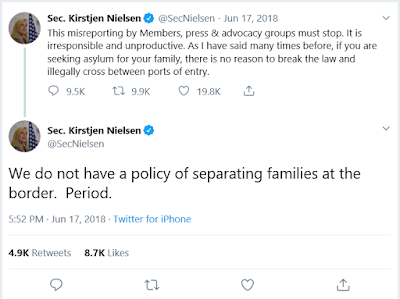 (And they still do.)  ("Defensive asylum" can be claimed wherever the claimant got through, and it should be up to a court to determine the validity of the claim, however loose the proofs of such might be--but this isn't up to DHS. This is why Trump is currently going fucknuts about judges.  He just hates immigration he can't control, period.)

Anyway, a more detailed story about her resigfiring (my term for people who have been told by the administration to go get up on their shield and ride it out) might be made that includes her attempts to warn Trump of how continuing legally-scrapped policies would be unwise or how isolated she was in terms of supporters, but I can't see how it matters. When being asked to do immoral things, she declined to leave.

I don't know what I should think about the removal of Secret Service director "Tex" Alles, either--especially having happened so precipitously on the heels of the arrest of the woman who was rather conspicuously not supposed to be at Mar-A-Lago.

(Can I just address this bit:


Secret Service agent Samuel Ivanovich, who interviewed Zhang on the day of her arrest, testified at the hearing. He stated that when another agent put Zhang’s thumb drive into his computer, it immediately began to install files, a “very out-of-the-ordinary” event that he had never seen happen before during this kind of analysis. The agent had to immediately stop the analysis to halt any further corruption of his computer, Ivanovich testified. The analysis is ongoing but still inconclusive, he said.
Read more here: https://www.miamiherald.com/news/politics-government/article228963409.html#storylink=cpy

Um, I think Q did this sort of thing in Skyfall  and everyone was like, "Shit, this millennial Q is such a rookie why is he even?" and it was one of the only bad things in Skyfall.)

Anyway, my theory of Trump is he wants all his shit super compartmentalized to maintain lots of control, so of course he does not like Secret Service being really hands-on. He loves people having access at his Winter WH and probably tries to maintain an own-brand security perimeter that keeps actual government agency professionals at a distance.

Because he loves crimes. Also hates transparency. And also needs lackeys to keep up his super dubious border crisis position. So that is my opinion of Trump and I know, I have said all these things before.

UPDATE: Here is part of Nielsen's legacy. I don't know if CNN or Fox has an option on her already, but please, think about whether what she accomplished was truly reprehensible before offering her ass a job in any opinion-making forum. Her opinions are contemptible.
Posted by Vixen Strangely at 12:03 AM