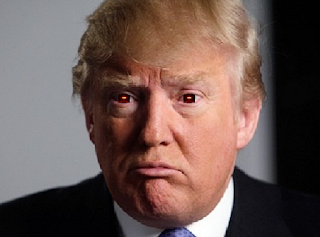 Everybody, even Trump's biggest fans, knows he surely does have an enemies' list. It likely includes both Democrats and Republicans whose lack of faith he found disturbing.  I've noted that Sarah Huckabee Sanders Tweeted out a supposedly humorous media-based one. But then there's the thirteen, or was it seventeen, or maybe nineteen, Angry Democrats that worked with Robert Mueller--those people, right? But what about the Muslim people he said he would ban from the US, and then did? And the migrants from South and Central America? And his political opponents, whoever they happen to be, who are subject to bratty name-calling and venomous treatment? He fights with even the dead, like the late Senator John McCain and First Lady Barbara Bush.

Trump is the president of malice towards all. If you can remember back to the 2016 campaign, Trump offered to pay the legal bill for anyone who popped a protester.

He was proud of a congressional candidate who assaulted a reporter. He encouraged a little bit of police brutality.

One of the astonishing things he said recently was that US troops at the border couldn't get rough, almost as if he very much would like "someone" to. Like the "Second Amendment people" he wished would do something about his 2016 opponent Hillary Clinton?


At roundtable in Texas, President Trump laments that US troops at the border can't get "a little rough," because "everybody would go crazy ... can’t act like they would normally act -- or like, let’s say, another military from another country would act." pic.twitter.com/q1TPW24Csa
— NBC News (@NBCNews) April 10, 2019

Or consider another recent story, that Trump told CBP Commissioner McAleenen that he would pardon him for illegally shutting down the border to block even asylum seekers.

It's very much like Trump doesn't care to let a little thing like "the rule of law" to get in the way of people doing in his long list of opposition targets because...his sheer egotistic grandiosity, or something like that.

It seems, and has seemed, quite a lot like incitement to stochastic terrorism to me, and it also seems like such regarding Trump's wildly inappropriate Tweet mischaracterizing something Rep. Ilhan Omar said to equate her with terrorism, just because she is a Muslim WOC sticking up for Muslim people's rights.  She proposed the daring idea that not all Muslim people were to blame for the 9/11 attacks, and yet all felt their rights jeopardized. Which is actually true. Which is actually a shame, and something we should take seriously. And yet, she was characterized as not being patriotic enough because she was alleged not to have made the proper obsequies to the fallen?

Given Trump's beyond wretched and self-aggrandizing responses to the tragedy of that day, he's hardly one to address what an appropriate response even should be. He is only being malicious here,  towards a woman of color who as a Congresswoman, has some ability to hold his administration and it's racism and religious bigotry to account.

She is by no means the person in the wrong here. It is Trump, following his malicious and un-presidential course, who is in the wrong. He has operated always from malice.  He is very un-Lincoln-like in this regard.

Actually, I would say he is a racist douchenozzle. I stand with Ilhan Omar. She deserves none of this negative attention for sticking up for those who are denied rights, altogether wrongly. She is the one without malice, here.

Trump knows nothing but malice, and I could pity him for the narrowness and uncharitability  this has given to his worldview.
Posted by Vixen Strangely at 2:07 AM

It appears that Pelosi has lost control of her caucus. If Omar is an example of what Democrats want to promote and defend, Trump will win a second term going away.