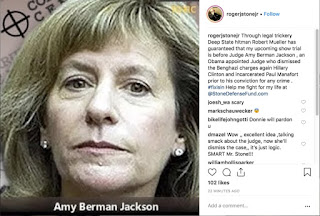 Of all of the astonishingly stupid things I have seen in following the Trump/Russia investigation(s), the above Instagram post from Roger Stone qualifies as, well, pretty up there. He posted a photo of the judge assigned to his case with a caption bollocks-full of paranoid Deep State speculation. Of course, this was not going to go over well regarding his legal jeopardy, and even though his lawyers (probably twisted his arms) persuaded him to sign on to an apology to keep his ass out of further trouble, he is still going to pay the court a visit because yes, he is in further trouble.

I'm of two minds about why Stone made such a singularly dipshit move; it could very well be that Stone has simmered in the right wing fever swamp for so long that signifying to his digital comrades has more importance for him than not fucking up his bail terms. But it also seems possible to me Stone meets the qualifications of "crazy as a fox" and is trolling the court and his followers alike in a race to see who can benefit him--either he thinks fuxxoring any good will with Berman Jackson would result in a recusal (um, no, because that's a little too easy, isn't it, sunshine?) or because he feels fit enough to do a jail stand if his bail is revoked and that would do miracle sympathy-numbers for his legal GoFundHimself. And either way, standing up against the investigation earns him points with He Who Must Not Be Incriminated, the POTUS with the Mostest (ability to issue pardons).

Long story short, Stone has an investment in Trump that he is willing to sink his liability further into. Maybe that's bad money. I have a theory that many of Trump's supporters right now are in a kind of sunk-cost deal with Trump where they think he'll compensate them for the cost of getting him elected, when getting him elected was the only benefit of their output they will ever, ever see.

Now, some folks necessarily thought they did have actual payable on election contracts as far as I can tell. Take Michael Flynn's dealings. He apparently did have a deal that would result in nuclear proliferation in the Middle East. And it now turns out that whistle blowers realize that nuclear know-how is about to be transferred to KSA, even though Flynn is long gone. It's possible this has something to do with Jared Kushner's relationship to Brookfield. Or maybe it just has to do with Trump's odd indifference to the concept of nuclear proliferation at all, as evidenced by his ignoring North Korea's continuing program and the scrapping of our treaty with Russia and also the promotion of the end of the Iran nuclear deal, that basically would result in us having no say or inspection over what they do. There is literally no thing in Trump's foreign policy that does shit at all re: nuclear proliferation except maybe encourage it.

But I tend to believe that most of TrumpWorld does revolve around some kind of quid pro quo, because Trump has gone so far above and beyond to try and shaft an investigation that would turn up nothing, if there wasn't anything amiss to be found.  I'm reading Andrew McCabe's Threat at the mo, and realize he is in a position of giving no fucks. His investment--career-long, was screwed by Trump with caprice or perhaps, a lack of judiciousness. The word that a CI investigation into Trump was accepted by the Gang of Eight, and that maybe Nunes was a little run'n'tell fool, should let everyone know how real the investigation is, regardless of one's investment in Trump as a political figure.

Trump is a tainted investment, and not solely because of the investigations against him, but because of how and why and what he's done to establish his knowledge of guilt and the behaviors he engaged in stemming from that. He is a likelier candidate for impeachment than reelection, in a world where facts counted more than feelings. And the conspiracy or collusion that gave the US this fool probably also hobbled our good ally the UK (although their politics was also pretty fucked and asking for it).

Anyway, we need to learn from this. Now. I would like to see Trump impeached. But the present GOP is too invested to understand why he is simply bad.
Posted by Vixen Strangely at 1:10 AM