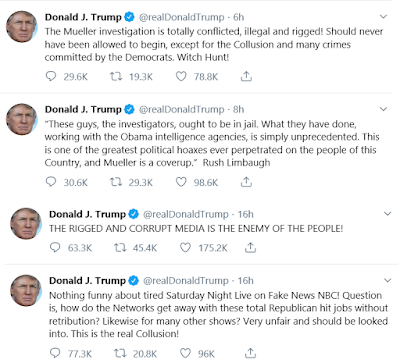 Trump taking his weekend relaxation at Mar-A-Lago completely easy is apparently impossible with the entirety of the week's ghosts still flitting their digital apparitions before his very eyes on the television and the intertubes: to wit, he used Twitter to imply that both Saturday Night Live (a comedy program that has been lampooning political figures for about forty years) and the Department of Justice (an actual agency of the government concerned with supporting the Constitution, a document to which certain officials, like Trump, even make oaths to protect, owing to the essential truth that the country fortunately made by immigrants, the descendants of enslaved persons, and the persons of the indigenous nations of North America, which expanded from 13 mostly British colonies to a sea to shining sea multiethnic polyglot pan-religious congeries is a creedal nation and a notional nation held together more by the words of our founders than lines on any map) have offended him so greatly that all this unseemly Trump-unflattering fuckery needs to get prosecuted.

Or not. There isn't, likely, any path for Trump to actually screw with the First Amendment freedoms that let SNL employ a talented actor like Alec Baldwin to  unflatteringly ape Trump's worst tics and excesses. There may be brakes on Trump's ability to halt the Mueller investigation as well. But the idea that Trump needs to preserve his image is a peculiar vulnerability he seems to have. Take his hair, please! Take his claims that his orange tan comes from his "great genes" when it comes from using bronzer trying to cover his pale skin and active rosacea. And also take his weirdly specific and probably not true physical statistics stemming from his improbable health exam.

He is certainly not 6'3", because he has stood next to people like Barack Obama and Justin Trudeau who are not 6'3" and he is possibly shorter. Let's call him 6"1" at most. Still respectably tall, no? But his weight--243? Nah. My dad is 6'2" (was 6'3" but is 70 so has a little shrinkage) and goes 260, and was a utility lineman and has even after retirement some solid muscle. Trump is bigger than my dad about the middle and arse and his only exercise ever is golf, with a little cart. So I'm saying Trump looks about 280 to my educated eye, and to maybe anyone who wants to be honest about what they are looking at.

Which I am not saying to bodyshame at all. I'm a big old girl myself, at 200 lbs fighting weight  and I think being fat is the least of Trump's problems. I am opposed to some of the fat-shame follies. But it's just freaking weird that his weight and height and health and taxes and lots of other shit seem to be such closely held secrets--maybe because Trump needs his illusions?

I think there's a lot of truth in the idea that the wall is a national emergency not because of immigration, but because of what Trump wants to see as his accomplishment.  It's not so much about border security, but a monument to Trump's ability. He needs to demonstrate that he can bring the physical goods, because he doesn't grasp abstract political goals, in the way he does material things like real estate. (But respect for private property, eminent domain issues, respect for local laws, the sorts of things a real estate macher would know? He also forgets these as president.)

This is a narcissist, a person driven by his ego. He needs such strokes as Japan nominating him for the Nobel prize.  Because it kills him that President Obama got one, and Trump could even pretend that man wasn't even born here.

Trump shows a lot of care about his self image. In my opinion, this is a grave weakness that could easily be used against him. Anything that would embarrass him about his finances or anything else he held dear would be leverage enough, his amour proper being what it is.
Posted by Vixen Strangely at 1:58 AM